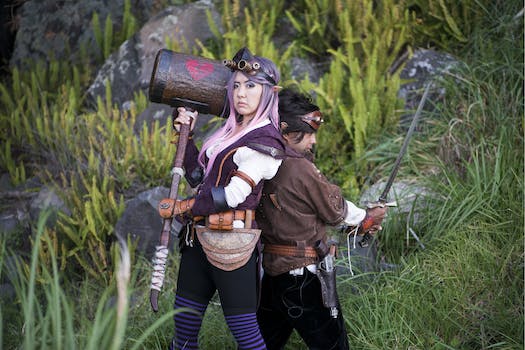 It’s got to be the dream, right? The reason why millions immerse themselves in online role-playing games or LARP out with their swords out. The end point. Actually being in the game. Imagination can take you far, and an IPS screen with a 144 Hz refresh rate will take you further but you’ll still be short the visceral thrill of actually sliding your pig sticker through the rib cage and then looting the corpse.

But bar some frightening social regression a life in Azeroth seems unlikely. Some will say this is probably for the best, that gamers may not be the best suited for this rough world. But you know what? Screw them. Keep the dream alive.

And to that end we have AFK, a webseries out of New Zealand which plays upon that very idea—tracking a group of gamers who wake up within the game that they’ve been playing. But dream scenario or not, writer and director Peter Haynes has to side with the naysayers regarding the likelihood of the transferal of skills from PC to battlefield.

“Well, for a start, I think a lot of people would be totally lost!” Haynes told the Daily Dot via email. “Part of the inspiration for AFK was the idea that people spend hours building up their skills in a virtual world, increasing their abilities in swordplay, archery, blacksmithing and the like by clicking a mouse, but if you handed them a real sword they might stab themselves in the foot with it.”

These thoughts could suggest that AFK is a vehicle to ridicule those that play these games but in fact it’s an affectionate, if slightly critical take on this universe and the efficacy of a game as a simulacrum for reality. Haynes is a gamer himself, a recovering World of Warcraft addict who sees this series as an attempt “to justify the amount of time I spent playing that game.”

What strikes in watching the first two episodes is the friction between the virtual and the real. Because the nature of the game in which the players find themselves reflects reality in some ways—there are no food vendors or other “non-playing characters,” so mere survival is a physical challenge—many of the skills developed from gameplay are redundant.

What emerges then is a conflict between pure gamers and those who are also LARPers (live action role players), two pastimes that outsiders often equate with each other: “Our hero is Q, who is a LARPer and medieval re-enactor in the real world, and because of this she has actual practical skills that might seem unusual or even ‘nerdy’, but they give her a distinct advantage in the world of the game,” Haynes explained.

“And while there’s a lot of crossover [between gamers and LARPers] there are plenty of ‘hardcore’ gamers who probably look down on LARPing. We have one of them in our series, Jack the Rogue, who only gradually comes to learn the values of practical skills over virtual.”

This may all sound a little niche for those not already enamored with the scene but Haynes is quick to point out that although there is plenty of gaming-specific humor there are entry points for those just looking for an adventure series. For example, as an explanatory device for novices one of the leads is a “noob” or beginner, so that there is nothing narratively inconsistent about educating him on the ins and outs of the role-playing world. “It has been a bit of a challenge actually,” he conceded, “because a lot of our cast and crew are gamers as well, and it’s easy to forget that a lot of the references we use aren’t actually common knowledge.”

It’s a fine-looking series, shot with a backdrop of the lush visuals of New Zealand’s non-Hobbit North Island, all on a Kickstarter-funded $10,000 budget. And after being picked up to premiere on a Kiwi cable sci-fi channel the series has begun to get traction within its home country—something the creator hopes to build on with the Web release. My guess is that there’ll be a great uptake—after all this is the dream of millions.