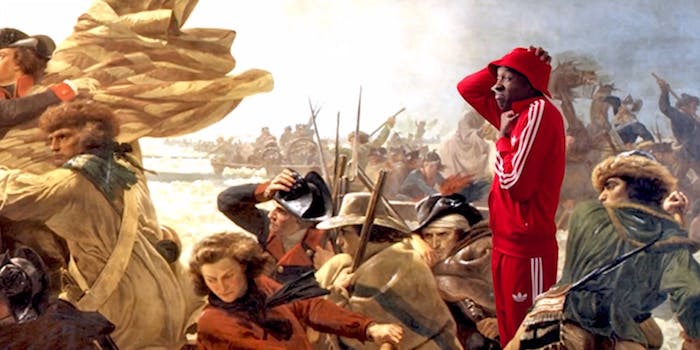 Screengrab via The Adventures of Jamel/YouTube

Any chance this tech could bring Jam Master Jay back?

Nas may well have argued that hip-hop is dead, but he was just talking about the present, playa. In the past, it’s as healthy as a horse, forever dressed in Adidas and soundtracking b-boy battles with the Amen break. All we’ve been waiting for is the technology to tap its goodness.

Well, according to the new webseries The Adventures of Jamel, it’s already out there. Only problem? It’s in the hands of the Illuminati and a breakdancing janitor.

The series is the creation of Jayson Musson, an artist of the “paintings made of fabric, specifically Koogi sweaters” ilk and, decidedly less effete, the man behind the alter ego Hennessy Youngman of the Art Thoughtz series. While some praise for that series—Ali G with an MFA—was perhaps overreaching, the instructional core of the show contained an intelligent and unclouded cynicism of the art world which is absent from the output of his day job.

And luckily it is the intelligent side of Musson that we get in Jamel. What could easily have been a single-note affair—the creator himself claiming to have dispensed with “superfluous Criterion Collection nonsense like characterization”—is rich, thoughtful, and funny. Of course the Illuminati are caricatures, reduced to base opportunists looking to use the time-traveling technology to go back in time to “hump” their mothers (or, as they chant, “Oedipus that ho”). But Jamel, played by Upright Citizens Brigade’s James III, is an urbane contrast to the expected hip-hop archetype that his outfit suggests, riffing on Dubai’s construction workers and Eastern European sex trafficking.

More than anything else, however, it is the love of hip-hop that resonates. References abound: KRS-One’s 600-page The Gospel of Hip Hop is predictably useless (possibly because Jamel, being in the past, will have to wait even more than the predicted 100 years before it becomes a new religion on Earth). And when the time-traveling b-boy, finding himself in an uncertain place and in a time of need, calls upon the “17” pillars of hip-hop, it is because Musson knows what we should—that there are only four. That one of them comes to the forefront to save the day will have any fan of the genre excited for future episodes and the possibility of Jamel leaving his mark in Ancient Greece.

Screengrab via The Adventures of Jamel/YouTube