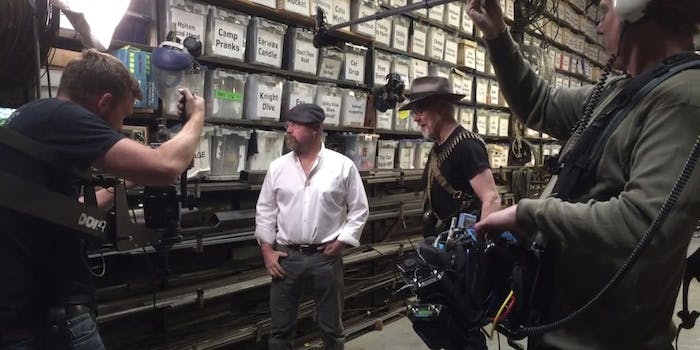 'I'm glad for the chance to say goodbye.'

MythBusters fans everywhere got a bittersweet treat Monday from co-host Adam Savage as he shared the last scene ever filmed on the Discovery series. In true MythBusters fashion, the series goes out with a bang. Literally, as Savage jokes, “Here we go, grenades for everybody.”

The last scene EVER filmed on @MythBusters (which ​also happens to be the first scene of our Revealed special).https://t.co/ZWrezqcPyd

Discovery’s longest-running series is coming to a close in 2016 after 14 seasons. This isn’t the first time that Savage has shared behind-the-scenes footage for fans of the series. The co-host previously documented the last day of filming on Nov. 11, 2015.

Today is an intense day — our LAST day of filming on @mythbusters. Let's do it together, shall we? #mblasthttps://t.co/4xXD1PKlzE

“It was my greatest fear that Mythbusters would just stop and we wouldn’t be able to do proper final episodes,” Savage explained to Entertainment Weekly last year.

“Making MythBusters has fundamentally and irrevocably altered the way I think as a person, as an artist, and as a scientist,” Savage says of the final season. “I’m glad for the chance to say goodbye with some of the best television we’ve ever made. I will miss making this show.”

The last season of the Mythbusters premiered on Sunday, Jan. 3 with Mythbusters Revealed. The show offered a behind-the-scenes peek as a special sendoff into its final season.

The rest of the episodes from the final season air Sundays at 8pm ET/PT on Discovery and the Science Channel.