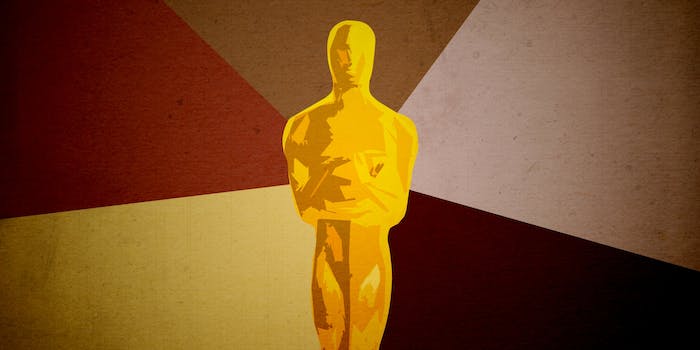 Idris Elba, Emma Watson, Michael B. Jordan among those invited to join the Academy

Could this be the start of a new era?

Following the #OscarsSoWhite controversy, the Academy made good on its promise to be more inclusive.

Various new—and diverse—faces were invited to join the Academy of Motion Picture Arts and Sciences in what is now the largest and most diverse class ever, the organization announced Wednesday.

Invitations were extended to 683 individuals, who, according to the press release, “have distinguished themselves by their contributions to theatrical motion pictures.” Those who choose to accept will join the Academy’s membership in 2016.

The new class is 46 percent female and 41 percent people of color.

“We’re proud to welcome these new members to the Academy, and know they view this as an opportunity and not just an invitation, a mission and not just a membership,” Academy President Cheryl Boone Isaacs said in a statement.

Boone Isaacs continues: “This class continues our long-term commitment to welcoming extraordinary talent reflective of those working in film today. We encourage the larger creative community to open its doors wider, and create opportunities for anyone interested in working in this incredible and storied industry.”

The group of diverse actors and entertainers is the latest effort of Boone Isaacs and Academy Governor Phil Robinson, who both said they aimed to double the number of women and diverse Academy members by 2020. This notion follows the 2016 Academy Awards when #OscarsSoWhite, the hashtag created by activist and writer April Reign, started a conversation about the lack of diversity among the nominees—all 20 of whom were white.

“The Academy is going to lead and not wait for the industry to catch up,” Boone Isaacs said in January 2016. “These new measures regarding governance and voting will have an immediate impact and begin the process of significantly changing our membership composition.”

Should each member of the new class accept their invitation, this would move the number of women members in the Academy from 25 to 27 percent and the members of color from 8 to 11 percent.  The list of new faces also includes 283 new international members from 59 countries.

Although these numbers seem impressive, according to the Los Angeles Times  it may not be enough. The Times reported that in 2012, Oscar voters were 94 percent white and 77 percent male, and those numbers have barely budged in 2016.

For Boone and Robinson to achieve their diversity goals, they would have to invite at least 375 women and more than 130 people of color each year for the next four years, the Times estimated.

Academy CEO Dawn Hudson told USA Today in January that her goal for Academy membership is to make it “closer to our moviegoing population and our United States population.”

“Cheryl Boone Isaacs has been talking about this and we’re getting a chance to see her gameplan play out. We’re starting to see it happen,” Shawn Edwards, co-founder the African-American Film Critics Association, told USA Today. “It’s a clear sign that the Academy is serious about making its population reflect the nation’s population. We’re heading in that right direction.”

New members will be welcomed into the Academy at an invitation-only reception in the fall.