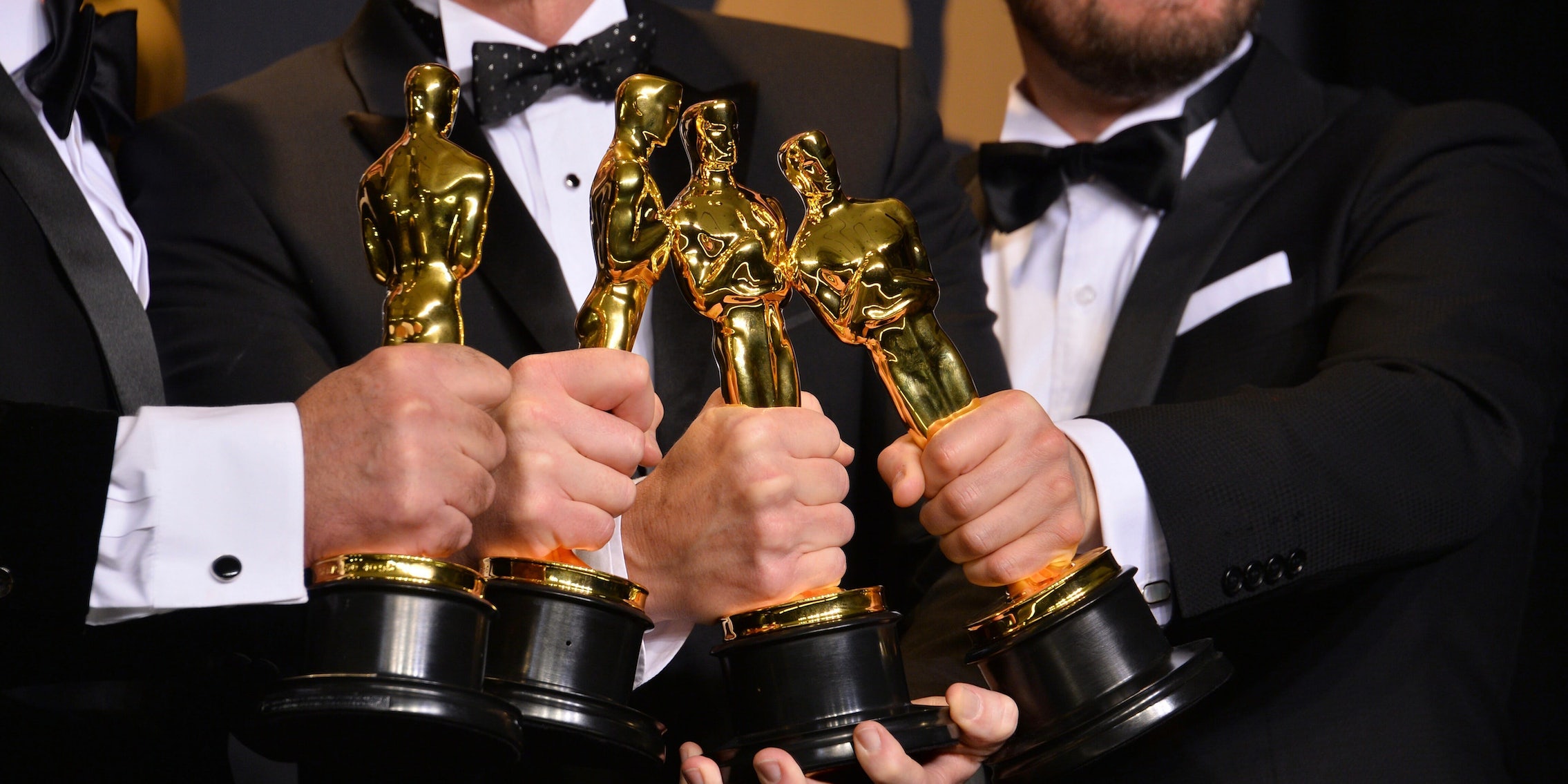 For months, the Academy of Motion Picture Arts and Sciences (AMPAS) has made several attempts to change aspects of the ceremony itself to cut down its run time and entice more viewers—moves that have often been met with outrage. And its latest attempt to cut down the length of the Oscars is being met with striking backlash from critics, filmmakers, and film lovers.

The Academy’s latest change arrived Monday after Academy president John Bailey revealed that four of the 24 Oscar categories—cinematography, editing, live-action short, and makeup and hairstyling—would be presented during commercial breaks. In an email sent out to Academy members (which was first reported on by the Hollywood Reporter), Bailey explained that “still honoring the achievements of all 24 awards on the Oscars” and that the Oscars will also be live-streamed so that fans can watch those four awards being presented online. Those award speeches would be shown later in the televised ceremony but might be edited.

The plan to hand out several awards during commercial breaks has been on the table for some time. The Academy has been committed to a strict three-hour ceremony since August; ABC plans to air the series premiere of Whiskey Cavalier after the Oscars like networks do with TV shows following the Super Bowl. Although several other options have been presented and dropped since then, the Academy excluding several technical categories from the televised ceremony felt like a real possibility; cinematography had been a rumored category for weeks.

Ahead of the announcement, some members of the Academy and filmmakers expressed their disappointment while others declined to publicly complain so that it wouldn’t affect their future Oscar chances. Film lovers urged the Oscars to #PresentAll24 awards, a hashtag first created by Gold Derby contributing writer Amanda Spears last week but which had a resurgence following the Academy’s move to push four of the awards to commercial break. She emphasized that it was “important for the history of the awards themselves” that the Oscars hand out all of the awards on the air and hopes that the conversations that it’s started lead to people having more of an understanding of how their work contributes to a film.

“The Oscars should be a celebration of the films and the nominees,” Spears told the Daily Dot in an email. “No aspect of filmmaking should be more important than the other. And from an entertainment aspect, some of the best speeches come from outside the acting and director categories.”

But now that the Academy has made it official, there is plenty of outrage from the film community even as some were resigned to the decision.

Guillermo del Toro, who won two Oscars last year for The Shape of Water, had a similar sentiment for the Academy’s exclusion of cinematography and editing.

Reposting, revised: I would not presume to suggest what categories should occur during commercials on Oscars night, but, please: Cinematography & Editing are at the very heart of our craft. They are not inherited from a theatrical or literary tradition: they are cinema itself.

Quoting a similar but now-deleted tweet from del Toro, Wonder Woman director Patty Jenkins echoed his thoughts on the matter.

I couldn't agree more. If we are here to celebrate the craft and medium, its hard to imagine putting these categories down a tier from any others. https://t.co/poGUUeOsRl

The outrage extended beyond del Toro, Cuarón, and Jenkins. Screenwriters, producers, actors, cinematographers, film critics, and cinemaphiles all shared a similar disdain for the decision and called out the Academy the move. According to critics, pushing several technical categories to commercial breaks takes away the rare moment in the spotlight many of these craftspeople have while de-emphasizing their role in those achievements.

The Academy is removing cinematography, editing and make up from the televised show?
This is just such a fundamentally stupid decision, I’m not even going to be bothered trying to be a smart arse about it.
It’s just too fucking dumb for words.

The Oscars get shit for being elitist but they are one of the only awards shows that televises winners in the craft categories. This decision is reprehensible. Shame on the Academy. Shame on ABC. If you don’t love a 3+ hour Oscars, you don’t love the Oscars. https://t.co/zSNOTDHhSQ

What better way to celebrate achievements in film than to not publicly honor the people’s who’s job it is to literally film things.

#DP & #EDITOR are arteries. I cannot live, breathe or give to the artform without them.
Fell in love with #filmmaking because of #cinematography + #editing. At 7yrs old, I could map every shot & the splicing of Twilight Zone.

Curious, what would #Oscars use slotted time for?! https://t.co/Rt2ouRuUUT

Not broadcasting film editing or cinematography is not only a slap in the face to both disciplines, but it is asking us to ignore the actual building blocks of the motion picture. https://t.co/QKSGJsekHM

There's not enough attention given to all the people "below the line" who make movies happen (hence why I wanted to start my podcast) The #Oscars should celebrate their work, not relegate them to an ad break. https://t.co/2HBpqEbU4I

I'M SORRY WHAT?! CINEMATOGRAPHY?!! EDITING?! MAKEUP? How can we inspire people to dream about making careers in these amazing jobs when we don't celebrate them on the public stage. DO WE REALLY NEED MORE PEOPLE TO BE INSPIRED TO BE ACTORS NO OFFENSE, AS ONE I CAN SAY THAT THOUGH! https://t.co/260PFGLY3d

As an Academy voter, I'm not happy about the decision to squeeze down some of the awards.

There is also the possibility of finding out who won these categories from someone in the room instead of when the winner is announced. And according to a recent report from Vanity Fair, many in the theater during the Oscars use commercial breaks to chat with other people, go to the bathroom, or head to the bar, so the winners of those four categories might have, at best, a scattered audience paying attention to their actual acceptance speeches.

As Rhett Barlett highlighted in a thread, some of those technical award wins can also provide some of the show’s most memorable moments from winners who don’t even have to be a household name. For instance, last year’s ceremony featured an impactful standing ovation for cinematographer Roger Deakins, who finally won his first Oscar for Blade Runner 2049 after 14 Oscar nominations.

1. Cinematography:
Roger Deakins finally wins after 13 losses. He gets a standing ovation.
"I really love my job. I've been doing it a long time, as you can see." pic.twitter.com/mu39FnPJUM

All 4 speech only worked when heard in full. Not as 5 second-highlight.
1. The relief of Deakins *finally* winning.
2. An *entire* speech signed.
3. A sculptor's thanks to Oldman – who responds back during his speech.
4. A rambling speech with a witty "observation" by an editor

Some even speculated if the reason that this year’s excluded categories were chosen had to do with the fact that none of the films nominated were produced by Disney (which owns ABC, the same network airing the Oscars) were nominated in any of those categories.

ABC/Disney #Oscars nominations outside of the Top 8

I urge every winner at the #Oscars to take three seconds (that’s all it will take) to thank their editor and cinematographer. By name. Just because ABC/Disney didn’t score any nominations in those categories, it doesn’t give them the right to kill those categories for broadcast.

By the way: How interesting that none of the categories consigned to commercial breaks happen to feature a nominee from Disney, the parent company of ABC.

It should be noted that the 4 categories relegated to commercial breaks contain neither "Black Panther", or "Mary Poppins Returns" noms.
Both films are Disney.
Disney owns ABC which televise the Oscars.

Leading up to Monday’s announcement, the Academy had several ideas on how to make the ceremony more enticing to viewers after several years of declining ratings.

The much-maligned popular Oscar category was quickly nixed but was seen by some critics as a way to acknowledge hugely popular films like Black Panther without giving it a best picture nomination; the Academy ended up nominating Black Panther for seven Oscars. The Academy’s plan to only feature performances from two of the five best original song nominees (the two frontrunners, “Shallow” and “All the Stars”) was reversed after Lady Gaga reportedly threatened to back out if the other three songs weren’t performed; shortened versions of all five songs will be performed.

A fairly recent tradition of having acting winners from the previous year present the Oscar to the new batch of winners is now intact after an initial plan to opt for more famous presenters backfired. The 91st annual Oscars will famously not have a host after Kevin Hart stepped down amid resurfaced homophobic tweets. And even when their name is called, newly minted Oscar winners are limited to 90 seconds to get to the stage and make their speech.

“[The Academy] really should cut themselves a break and remember that there are more than four channels with three airing reruns,” Spears said. “They have loyal fans who do not care what film or movie star is nominated. Play to your audience! The Super Bowl is a football game. The Oscars are about celebrating the year in film. Movie lovers will always turn in.”

As for whether the Academy will reverse course on this decision as it has with so many others? Some like Spears are doubtful that it could happen, at least not without a major intervention from actors or organizations like the Screen Actors Guild to speak up on behalf of those craftspeople. But what people will also be missing aside from those awards are some of the things that make the Oscars so special.

“It was one of the best [Oscar moments] of the year,” Spears said of Deakins’ Oscar win. “The announcer explaining this was his [14th] nomination and the standing ovation was enough for the viewers at home to understand why this was so special. But if you look at best cinematography last year, it wasn’t just Deakins it was also Rachel Morrison, the categories first ever woman nominated and the applause she received. How could you want that moment to take place during a commercial break?”