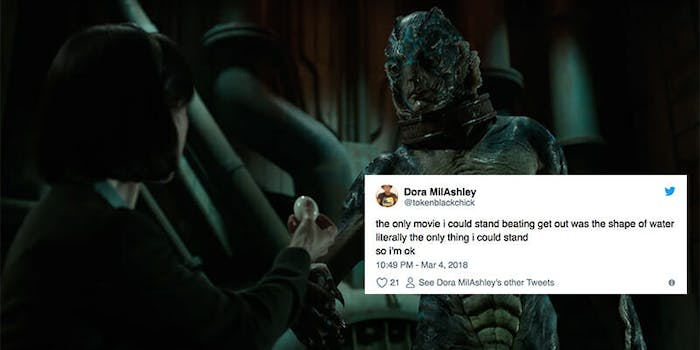 The 90th iteration of the Oscars has come and gone, and while predictable, subtle nods to the Time’s Up movement and Parkland shooting were sprinkled throughout the night. In general, the award show glided along sans drama, and avoiding any disastrous La La Land-esque mix up, the Oscar for best picture went to The Shape of Water.

Fans across the Twittersphere celebrated the flick.

Shape of water. Beautiful film. I love that amphibian god so much. Well done @RealGDT #oscars

Some were just glad it wasn’t Three Billboards Outside Ebbing, Missouri.

If it wasn’t #GetOut I’m happy it went to #ShapeOfWater pic.twitter.com/ouHOLvYJre

We will look back on 2017 and think that Get Out was the best movie and not The Shape of Water. I can promise you that.

The Shape of Water sucked, I wish Warren Beatty had just said The Florida Project and ran off stage #Oscars

Maybe #shapeofwater had its moments but #ThreeBillboardsOutsideEbbingMissouri was the best movie of all time pic.twitter.com/eKXdVlccsV

And a lot of people just made fish jokes.