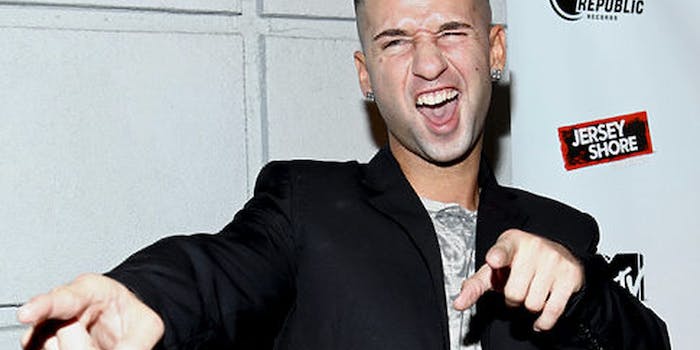 Abercrombie asks The Situation to disrobe

However, this may be the first time the cast has been offered money to not endorse a product.

When retailer Abercrombie and Fitch asked one of the cast members, Mike “The Situation” Sorrentino, to stop wearing its clothing for a handsome reward, “Abercrombie and Fitch” and “A&F” became two of the ten most talked about global topics on Twitter.

Twitter users were generally skeptical about The Situation’s negligible effect on Abercrombie and Fitch clothing. Since Abercrombie has been out of the limelight for a while, some users are questioning whether this is simply a publicity stunt.

“I doubt The Situtation could really destroy Abercrombie & Fitch’s reputation. In fact, he might just help it. LOL”

“Fitchuationgate is pretty pathetic on A&F’s part. It looks like a desperate attempt to be relevant again.”

“Abercrombie & fitch pay US reality stars not to wear its collections to protect its brand image. Incredible, but can you really buy cool?”

“While paying the Situation to not wear its clothes is funny, I think Abercrombie & Fitch is seriously delusional about its brand perception.”

“We understand that the show is for entertainment purposes, but believe this association is contrary to the aspirational nature of our brand, and may be distressing to many of our fans,” reads the statement.

“Abercrombie & Fitch, their most popular shirt, they told me, is ‘Fitchuation.’ I mean, where did they get that from? Obviously from myself,” Sorrentino told New York Magazine last summer.

When reached for comment, MTV said they weren’t taking the bait.

“It’s a clever PR stunt and we’d love to work with them on other ways they can leverage Jersey Shore to reach the largest youth audience on television,” an MTV spokesperson told The Daily Dot.

However, Twitter keeps this event in perspective. Some of the highlights:

“Hilarious that all of the tweets read today are about Abercrombie paying The Situation to not wear their clothes. #contributingtothemadness”