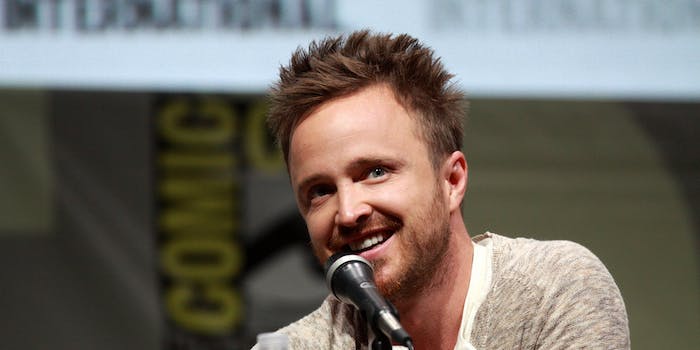 The Breaking Bad star had fans running all over town to score tickets to a livestream of "Ozymandias."

It’s no secret that Aaron Paul is a huge fan of Breaking Bad fans. He did an AMA on Reddit last month (and later awarded “Bitchies” for the best questions). Two fans will to get the chance to roll up in an RV, “cook” with him and co-star Bryan Cranston, and watch the series finale with the entire cast. When some of his fans arrived at his house, he greeted them.

And just three weeks before the series finale, Paul topped himself yet again. Not only did he live-tweet last night’s episode of Breaking Bad, he watched it with over 700 of his biggest fans in Boise, Idaho.

I rented out the Egyptian theater in downtown Boise to live stream the next episode. Who’s coming with me? It’s free. It’s fun. #YeahBitch.

The local radio stations gave out some tickets, but the Idaho native decided to make it fun for people. He turned it into a giant Twitter scavenger hunt.

Described as a “cross between Ferris Bueller and Willy Wonka” by Uproxx’s Danger Guerrero, Paul had fans running across the city with every tweet in an attempt to grab a set of tickets faster than you could say “Gatorade me, bitch!” And longtime locals clearly had a leg up.

It’s not quite the mad dash surrounding the Golden Ticket that Willy Wonka offered to just five people to tour his famous factory, but for some fans it might as well have been: They didn’t have to consume large amounts of chocolate to do so, but they got to watch “Ozymandias” with Paul in the flesh.

Here’s just some of the things fans had to do in order to snag a free ticket.

Two tickets across the street from Bardenay on the white picket fence. #igotitbitch when you pick it up so people can move onto the next.

In the alley behind Bardenay. Look for the sign Glass Only. Big green Garbage bin. Not inside but connected to. #igotitbitch

Who else would reward you with a free ticket for cursing?

Come help me push this car on 5th and Idaho. I will give tickets to the person that can yell bitch the longest.

Hotel 43. I will be dropping them out of a window. Good luck!!

Paul probably had as much fun as the fans who were successful in procuring a ticket, and with gleeful fans tweeting their success, that’s saying something.

Just met @aaronpaul_8 downtown… And #igotitbitch !!! What a great guy man I appreciate it!! pic.twitter.com/b8Yhsg9Sxq

Getting trampled at Hotel 43- totally worth the scrapes on my leg! Thanks for the tickets @aaronpaul_8 #igotitbitch pic.twitter.com/9HTDiurCG1

But even those who weren’t as successful got something out of it.

Didn’t find tix in the #igotitbitch hunt, but I did bike around Boise and sweated off my wine hangover. So I’d still consider today a win.