Carter has a history of trolling fans on Twitter.

Carter, who rose to fame as a young teen in the early aughts and continues to produce music and tour to this day, has a tumultuous relationship with social media. (And with Shaq, but that’s another story.)

Carter’s Twitter feed, @aaroncarter, is equal parts complaints about his life, retweets from excited fans, and self-promotion about his current tours. Carter is not a celebrity hidden behind a glass case: He is extremely interactive with his fans. For that reason, many of them believed him when he tweeted a phone number he claimed was his. Several fans were momentarily excited that they had a legitimate way to call Carter.

My phone on silent when @aaroncarter tweeted his number I can see that I have a notification but not the number. Aaron you should call me

Is it me or did @aaroncarter really just tweet his phone number and then deleted the tweet?

Carter deleted the number shortly after. A subsequent tweet revealed that the number belonged to a girl who, apparently, had Carter’s actual phone number and gave it to her friends to let them “bully” him over the phone. Carter was not happy about this.

We’ve blocked the phone number in the screengrab below. The digits belong to a family in Lincoln, Neb., where Carter performed on Thursday, Oct. 9. 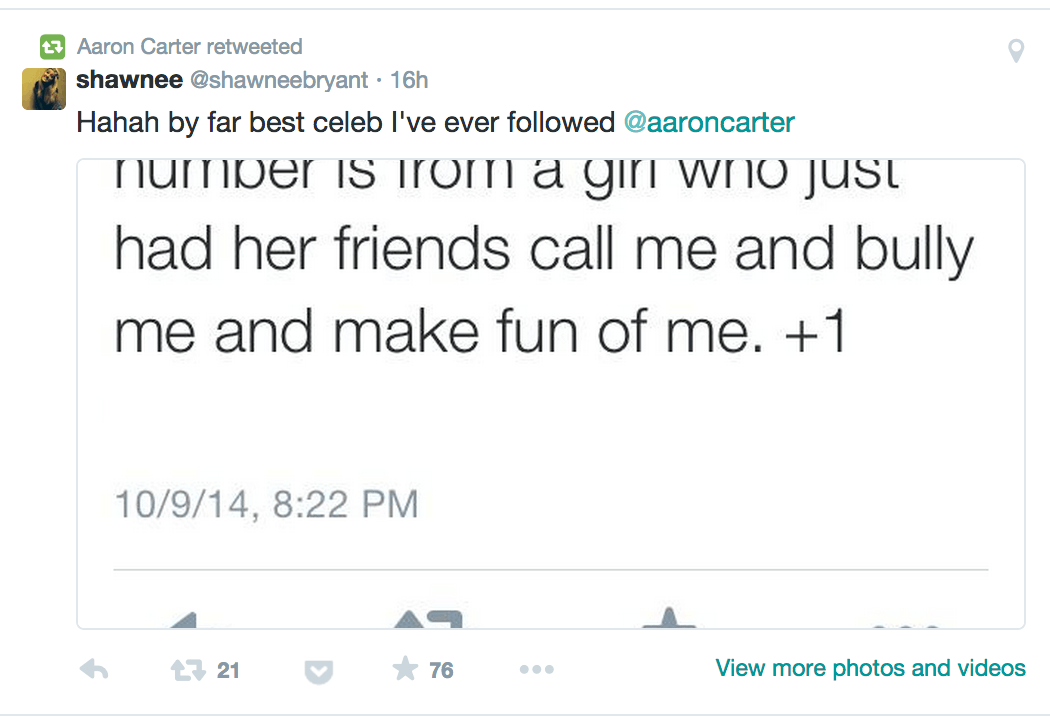 Man fuck people sometimes!! Girls like that make me not want to be nice to people cause I never know what to expect after. Not cool

It’s fine. Make fun of me. Put me down. Say whatever you want. What I know is how far I’ve come from where I’ve been and the work I put in.

You Guys don’t understand how tough it is on me at times. Always constantly trying to prove myself is really hard at times. #ImNotGivingUp

Everyone have a great night. Sorry for bombarding you with my problems sometimes I just don’t have anyone else to talk too….

It’s not the first time Carter has lashed out on social media against his fans and encouraged followers to prank people who annoy him. Last year, Tumblr’s Amber Gordon wrote an article on the Daily Dot describing how Carter’s fans harassed her and she was subsequently blocked by the singer after she called him out for cyberbullying women on Twitter.

The Daily Dot reached out to the owner of the phone number but has not yet received a response. In the meantime, Carter is “rebuilding” his “love with his fans.”

Rebuilding my love with my fans 🙈 pic.twitter.com/iMbGVH8VhA

Photo via fireatwillrva/Flickr (CC BY 2.0)