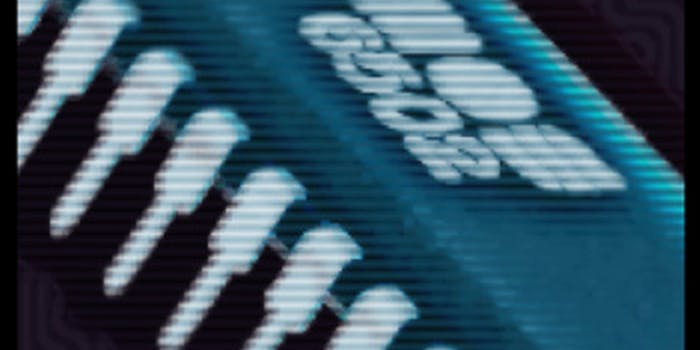 So, this one time at Bandcamp.com, something pretty great happened. Inverse Phase released the album Pretty Eight Machine: an 8-bit music cover of influential industrial band Nine Inch Nails’ recently remastered debut album from 1989, and it is retro-tastic. It’s gone straight to #1 on Bandcamp, according to the artist’s Facebook page.

Featuring all the sounds of your favorite ‘70s and ‘80s electronics, it appeals on both a conscious and subliminal level. NIN fans are, after all, a group people old enough to have grown up with the original Nintendo and Atari, and young enough to respect a good retro-chic avant-garde cover of a good 23-year-old avant-garde album. Equipment included the classic Commodore 64, an Atari 800, NES, Sega Master System, Game Boy, and a Japanese Sega Master System.

No word yet on how NIN frontman Trent Reznor feels about it, though it’s not hard to guess. He’s famously techno-adventurous, with an open attitude towards remixes and downloads. Reznor’s battles with music industry corporations are legendary, and he famously crowdsourced the video for the “Discipline” single from the album Year Zero, ending up with a primitive cartoon version of the band in Village People garb against an 8-bit color backdrop. Reznor reportedly loved it, as have all but 395 of the 1.4 million who have viewed it on YouTube.

Pretty Eight Machine is a reverent remake, showing a true aficionado’s awareness of nuance (something particularly difficult to convey on an array of instruments culled from an electronics scrap heap thirty years old). Between this and the String Quartet version of the same album, you’ll have pretty much covered the spectrum of unlikely, yet enjoyable, remakes of Pretty Hate Machine.

This album began as a Kickstarter project, and had 162 contributors who made it possible. According to the Bandcamp page:

The album represents the culmination of so many things:

– the recent release of the remastered PHM

– my fandom and love for Nine Inch Nails

– my love of old-school computers and game systems

– a hope that Trent Reznor (who likes vintage synths, tech, and gear) and Rob Sheridan (and his pixelated avatar) will enjoy it

8-bit is having a bit of a moment right now. From GIFs to static art, to Radiohead covers to YouTubes, it seems people just can’t get enough of this faux naif techform. The limitations that once frustrated artists are now seen as nothing more than a particular sound and suite of instruments, as much a part of the contemporary music scene as the upright bass or Arcade Fire’s hurdy gurdy.

On June 13, Off Book on PBS featured 8-bit art in a video covering the emergence of a vital culture of visual and sound art from an apparent wasteland of tinny, dated sound effects.

True, some artists saw the potential from the beginning and created 8-bit albums as early as 1978, but these failed to reach widespread popularity, even among the art-tech crowd. They were, however, influential over time.

What then was primitive is now naif; both are art, both use the same tools, but the aim and outcomes could not differ more.

Using 8-bit technology to create a tribute to Nine Inch Nails, one of the most technically adventurous of bands, seems an ideal confluence of subject and technique. The album is available as a download or CD, and each track is also embeddable. “Information wants to be free,” is an ‘80s idea, but giving the listener a chance to help the artist pay his rent is very of our own time.