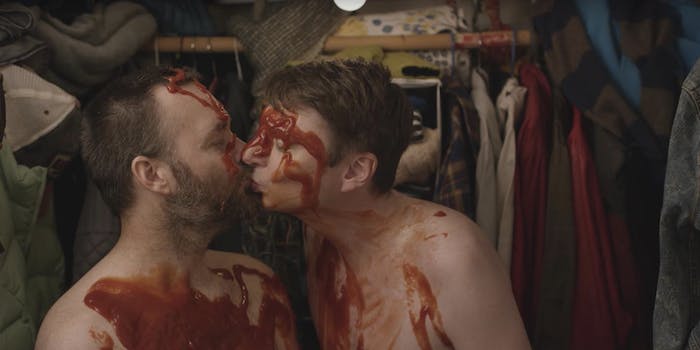 There are some auxiliary perks to having kissed some of Hollywood’s best and brightest.

Mike O’Brien has been locking lips with unsuspecting celebrities since 2011, and he says it never gets less thorny.

“There’s a genuine awkwardness,” O’Brien explains. “You have to stand really close to each other. You forget that there’s a small crew of five people a room away once the door’s been closed.”

O’Brien’s attempted kisses are part of 7 Minutes in Heaven, the webseries he developed during the summer break of his first year as a Saturday Night Live writer. He invites celebrities of varying prestige—from Emmy-winner Jon Hamm to Insane Clown Posse—and has awkwardly close encounters in a closet.

Of a list of 10 or so ideas he had for a series, O’Brien laid out this path because it “seemed the easiest to produce.”

“The other ideas probably involved rocket ships or something,” O’Brien notes, saying he was originally worried it wouldn’t be able to book anyone big enough to draw in viewers. He was wrong. “Right on the first day Kristen Wiig did it, and we were off and running.”

After a nearly three-year hiatus, 7 Minutes in Heaven returned with fresh episodes in 2016.

“One of the thesis statements we set out for is this is the interview where you don’t get asked any of the cliched questions you’ve gotten asked a hundred times,” says O’Brien, who digs deep on Wikipedia and old interviews to find random facts they can go off on, and mixes that with random life questions and improvisations.

The big moment, however, is O’Brien’s attempt to land a kiss on his unsuspecting guest. The first eight people on the program were only told it was an interview in a closet, making their reaction to O’Brien’s big move really genuine.

“We still don’t tell anyone, but people come in having watched a couple,” O’Brien adds. “Sometimes they kind of plan a comedic way to kiss or not kiss. Sometimes you have to get through that and have some other genuinely awkward moment. Even if people plan, you’re still in an actual closet together and it’s awkward.”

One of his most awkward encounters was a group episode, with Insane Clown Posse.

“I realized halfway through the interview that Insane Clown Posse hadn’t watched anything,” O’Brien laughs. “One or both of them had done time in prison, where I don’t think guys kissing is cool, at least according to TV shows about prison. I was like, ‘I have to try something.’ That was an uncomfortable one. My heart was beating.”

He wound up hugging Violent J and kissing him on the neck.

Regardless of guest, O’Brien says the weirdest part of the experience isn’t the kiss, but what comes after. “We just had this awkward kiss or not kiss, and we’re both trapped,” he says. “I look at the camera and I’m like ‘OK, you guys need to come get us.’ Then we stand there mostly silent and I keep quietly saying ‘This was so fun, thank you so much.’”

O’Brien has also noticed a difference between male and female guests, and how game they are to make out.

“There’s some kind of psychological paper to be written about what goes into those moments,” he says. “One of the interesting things to me is that women usually don’t want to kiss at all, and you’re like ‘But you kiss on-screen every episode of your show!’ But this is considered somehow real? They’re often like ‘I’m seeing someone’ and I’m like ‘This isn’t that type of kiss.’ When they are really firm about not wanting to do it I’m like ‘What do you think this is?’”

Guys, on the other hand, are often up for anything.

“Maybe because we both know there’s no confusion afterwards,” O’Brien says. “I think I am equally uncomfortable with both. It’s a stranger and this is their private space.”

“She’s a movie starlet,” says O’Brien, who admits one of his favorite overall episodes was recently jumping in the closet with his comedic hero, Will Ferrell.

For future episodes, O’Brien hopes to bring back guests like Jason Sudeikis and Olivia Wilde, but have them together as a couple, instead of individually. And there are some auxiliary perks to having kissed some of Hollywood’s best and brightest.

“When I run into these people we’re old friends now,” says O’Brien. “I saw Ty Burrell on the streets of New York and we were all hugs because we’d done the interview a month before. It would be weird if we shake hands now, we kissed!”

Of course, there are limits to his connection. Trying to land a kiss on an unsuspecting star in your webseries is not the best way to get invited to all the hot Hollywood parties.

“I think the best way is to be a movie-star billionaire,” laughs O’Brien. “But I do get a hello at the Emmys.”

7 Minutes in Heaven airs weekly on the AboveAverage YouTube channel.