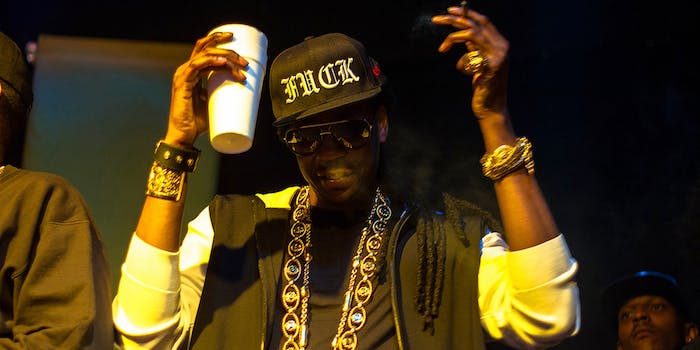 2 Chainz rolls up a golden fatty, smokes the world’s most expensive joint

Despite the shrieking protests of Nancy Grace, 2 Chainz hasn’t shown any signs of stopping his cannabis consumption anytime soon. Instead, he’s decided to take his recreational weed usage to the next level by taking hits from the world’s biggest bowl and smoking 24K gold joints.

The extravagant endeavor is all part of GQ Magazine’s webseries “Most Expensivest Shit,” in which 2 Chainz exposes viewers to “the most outrageous luxury goods on the planet.” In the latest episode, the rapper with the flare for the finer things in life sets out on a mission to smoke the world’s most expensive joint.

Accompanied by celebrity cannabis expert Dr. Dina, the “I’m Different” artist took to Los Angeles’ Stogz Tobacco to roll “the caviar of joints.” Thanks to 24K gold rolling papers and bud that costs approximately $800 an ounce, the duo manages to create one hell of a dapper doobie. Oh, did we mention they break from smoking the world’s most expensive joint to take a hit off a pipe with a bowl that requires a blowtorch to light

While you might not condone the man’s drug use, you have to give it to the guy—at least he knows how to smoke in style.