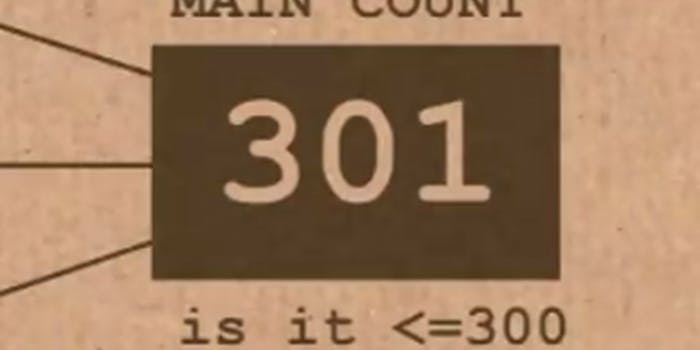 Hint: It's to help stop bots.

If you spend a lot of time on YouTube, chances are you’ve seen countless recent videos that have had their view counts frozen at exactly 301. But why? Ever since the number began appearing last July, YouTubers have suspected everything from a glitch to a conspiracy.

But according to Ted Hamilton, a product manager for YouTube analytics, the answer is far more arbitrary than that. Speaking with Numberphile host Brady Haran, Hamilton offered the explanation in a video dedicated to the mystery.

“We get asked about it all the time,” he said. “I wouldn’t say that it causes angst, but I would certainly classify it as an annoyance.”

After a video reaches a certain number of views, Hamilton explained, YouTube tells the database to freeze the view count until YouTube can manually verify the correct count to protect against botting attempts—i.e. using automated computer processes to artificially inflate the number of views. YouTube view counts are initially tracked by servers near the end user. By looking at reports from these individual servers, YouTube engineers can detect suspicious patterns in the data.

“At some point the decision was made that we need to draw a line between what is innocuous and the database can handle and all of a sudden serious business,” he said. “The proportion was calculated to be at about 300.”

So why 301? Blame it on one YouTube programmer’s errant less-than-or-equal-to sign. The code tells the database to keep counting views up to and including the time when the count is equal to 300, allowing one final view to get counted before it freezes.

“Whoever wrote this code probably did not realize the magnitude of what they were doing,” said Hamilton. “It is now one of the idiosyncrasies of YouTube.”

When the Daily Dot reached out to YouTube last July after the freeze first appeared, a company spokesperson told us they were “working on it.” However, Hamilton’s explanation should clear up the confusion once and for all.

Update: In 2009, YouTube personality HappyCabbie also explained the 301 bug in an informative video. Watch it here.