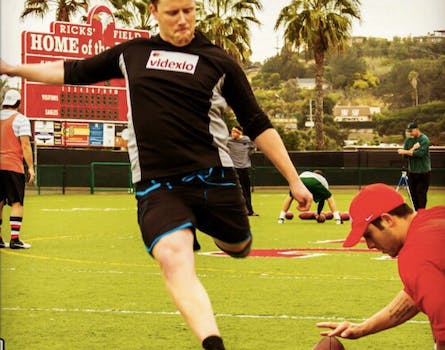 According to Browns analyst Tony Grossi, the Browns are considering Havard Rugland, the trick-shot phenomenon from Norway.

On Tuesday, Cleveland Browns fans bid goodbye to their beloved franchise kicker of the past 14 years.

On Thursday, the team tried out a guy from YouTube.

According to Browns analyst Tony Grossi, the Browns are considering Havard Rugland, the trick-shot phenomenon from Norway. Rugland caught the Internet’s attention in September, when his homemade video of him making seemingly impossible football kicks—into canoes, into basketball hoops, and most importantly, from 60 yards away—went viral. (The NFL’s record for longest field goal in a game is 63.)

This is not the first time a player has turned YouTube success into an NFL tryout. Last year trick-shot quarterback Alex Tanney signed with the Kansas City Chiefs.

Rugland ended up trying out for the New York Jets in 2012 and tweeted earlier in March that he’d just worked out with the the Detroit Lions, though he’s yet to sign with a team.

If he signs with the Browns, he’ll replace Phil Dawson, the Browns stalwart kicker who’d been with the team since 1999. He announced his departure Tuesday with a few emotional tweets, writing, “Hey, Cleveland. Thank you for a tremendous ride. Your love, support & encouragement have blessed me deeply.”

He was the second beloved Brown to recently announce his departure over social media. On March 14, kick return specialist Josh Cribbs bid farewell to Cleveland with an emotional Instagram post.