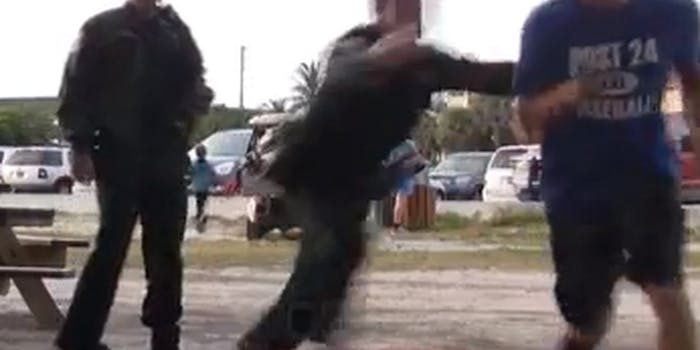 This is not the first time that Charles Ross, chaotic hooligan behind RossCreations, has been arrested for trying to make a video.

A YouTube prankster was arrested again last week after filming a video that finds him leapfrogging over the heads of two policemen in Bradenton, Fla.

Charles Ross, 18, is the confident and chaotic hooligan behind RossCreations, a prank-centric YouTube channel that boasts 96,000 subscribers and more than 7 million views. His videos feature footage of him running through Bradenton streets in his underwear, singing loudly in quiet places, and making out with unwilling strangers.

On Saturday, Ross posted a clip to YouTube titled “Jumping Over a Cop.” In the video, the camera zooms out from a holstered pistol to find two policemen sitting on a picnic table in a dilapidated park. They looked relaxed and unperplexed, until Ross comes screaming into view.

Ross takes one step onto the picnic table then flips over the cop on the right, landing on his feet before scurrying away. He comes back into the frame a few seconds later, only to be questioned by the cop he just hurdled.

“Tell me you know us,” the cop says. Ross says that he doesn’t.

“The next time you do this, we will be forced to do something,” the policeman says to Ross. “Then I’m going to arrest you.”

Then he questions whether or not the whole episode had been recorded.

That’s when Ross tries to run away, but his efforts prove unsuccessful. The teen gets wrestled to the ground by the two policemen just a few steps away. He’s handcuffed and taken off to Manatee County jail, where he spent the night in jail.

He was released shortly after and, on Saturday, “finally got the footage back” from police. Since posting, “Jumping Over a Cop” has been seen more than 237,000 times.

Ross did not respond to the Daily Dot’s request for comment.

This is not the first time that Ross has been arrested for trying to make a video. In September, Ross was arrested and charged with negligence and obstruction of justice without violence and forced to pay an $870 bond. In January, police nabbed him outside of a South Florida mall for giving strangers wedgies.