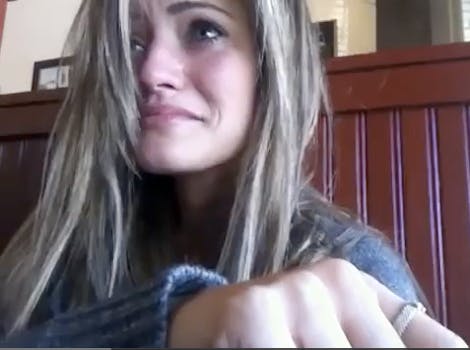 YouTubers immediately took to the site to express their feelings about Steve Jobs' passing — as well as  to criticize others for doing so.

YouTube, arguably the most intimate and most alienating of all online communities, is commemorating Steve Jobs’ recent passing in true YouTube style: with both heart and cruelty.

Hundreds of YouTubers — notably celebrities such as iJustine —  jumped online to produce Jobs tribute videos — mashups of photos and music. Others shared their collective grief through Vlogs – video logs.

The result, predicted  “minor YouTube celebrity” Jonathon Paula in a tweet: “Steve’s passing will be the biggest trending event in social media history.”

YouTube celebrity and vlogger iJustine, known for her looks, her quirky personality and love of all things Apple, created an almost instantaneous hit by filming herself breaking down while dining with a friend in a restaurant.  She filmed the video on her iPhone, the same device that delivered the news to her.

“I did a book report on Steve Jobs when I was in sixth grade” she says between sniffles.

Uploaded yesterday, iJustine’s video has received more than 22,000 comments, many of which are disrespectful — calling her an “attention whore” and accusing her of profiteering from Job’s death.

And then there was the fart. Many actually took her to task for allegedly passing gas at the 59 second mark — although the fart sound could easily be a chair or a squeaky leather boot.

Fart or no fart, iJustine’s video is by far the most discussed RIP Steve Jobs video, approaching 80,000 views in less than 24 hours.

Popular YouTubers, well aware of iJustine’s love of Apple, took to tweeting at iJustine the minute they heard the news of Jobs passing. Other YouTubers made videos trying to cheer her up.

CQBrett said in her vlog that  iJustine’s video was the saddest she’s seen so far — “she made me cry.”  MeganSpeaks, on the other hand, addressed iJustine’s farting problem. EatMyDiction1 took it one step further and created a parody of iJustine’s video, complete with fake sobbing and a similar title.

While iJustine is certainly the current YouTube Queen at mourning Jobs death, that hasn’t stopped other YouTube celebrities from weighing in.

TheAmazingAtheist ranted for a bit, as per his schtick, saying “Steve Jobs died to spite me… the universe knew that I didn’t want to do an Apple video.” The Amazing Atheist is also comfortable taking the blame for Jobs’ death.

Chris Pirillo did a live show with his fans, discussing Jobs. Pirillo set the tone for his video by stating clearly in the beginning he wouldn’t tolerate trolls.  “It’s really not in good taste.”

Toby Turner, normally super hyperactive – to the point of being annoying– was somber enough in his demeanor to worry his fans in his Steve Jobs video.  Turner mentioned in his video his series wouldn’t exist without Jobs.

Many other YouTube celebrities have taken to tweeting a similar statement, that Apple products have made their fame possible; like Jenna Marbles, Annoying Orange creator Dane Boedigheimer, and the cast of Epic Meal Time.