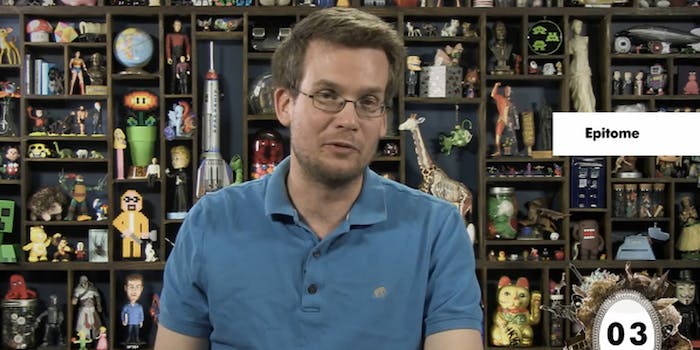 John Green challenges you to pronounce these 79 words

Interesting that Green picks up where Pronunciation Book left off. Iiiiinteresting.

YouTube stalwart Pronunciation Book is now in Phase 2 of its viral marketing campaign, but the world still needs to learn how to say things properly. The Internet needs a new savior.

The Vlogbrother hit us with some knowledge on how to pronounce 79 oft-misspoken words.

His video for Mental Floss clues the uninitiated in on how to correctly say things like Benedict Cumberbatch, nuclear, Asperger’s syndrome, and caramel. A couple of grammar notes are peppered in for good measure.

Contentious words like GIF, Wikipedia, and Niall Horan made the cut, but, sadly, there’s no space for aluminum/”aluminium.”

Interesting that Green picks up where Pronunciation Book left off! We caught him tweeting about the webseries before we launched our own theory, that it’s building hype for a Battlestar reboot. We know ProBook is a marketing campaign for something, but who knows. Could it be a film version of Green’s young-adult novel The Fault in Our Stars? Or a Vlogbrothers TV series?

We’ll let you know in about a month. In the meantime, let the conspiracies fly.