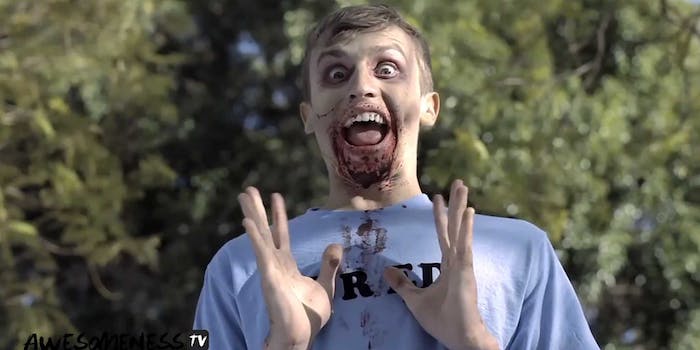 It's a fate worse than being a zombie ... being turned into Fred!

And we thought the zombie apocalypse couldn’t get any worse. Fred’s strain of the virus will turn you into a walking, talking version of himself who’s on the prowl for Judy. Replying “first” and eggs won’t even save you from the apocalypse—or the “annoying.”

A DJ interviews with Psy for a new job, and in the process reveals the reason why he left his old job: He’s tired of getting music requests when he already has a set playlist (not to mention the stalker fan).

A party turns violent once everyone breaks out the Beer of Thrones and channels their inner Westerosi. It’s all the violence, horse hearts, and incest you could ever imagine in a 12 oz. bottle of beer!

Caleb McCarthy has created an app to track and validate just how not-racist he is, and he needs your help to fund the project. There’s plenty of functions and fundraiser perks if you donate, and you can even compete to be the least racist person you know.

The boys of Lonely Island give us a lesson on semicolons, but it’s apparent that they don’t actually know how to use them, which (spoiler alert!) their teacher is quick to point out.