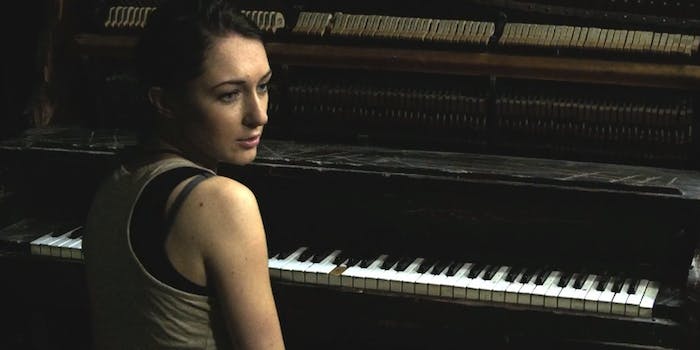 If you find yourself in the middle of the zombie apocalypse, you might as well make some music.

One pianist wakes up in a hospital in the middle of the zombie apocalypse and finds a piano to bang out the theme to The Walking Dead. Despite the noise, she doesn’t notice the walkers nearby until a passing gunman kills her violinist.

Hannah Hart’s drinking for two as she enlists the help of Nerdist Chris Hardwick (who doesn’t drink) to make a Doctor Who favorite just in time for the season premiere (even if they’re conflicted on whether they actually like it).

Taking a deck of cards, Stuart Edge and a partner each sign a card and place it in their mouths. After a peck on the lips, he reveals that the cards are switched. The participants are a little freaked out.

Todd Snap is on a journey. He doesn’t plan to catch ’em all, but with his handy camera he will have to capture them all (on film) on Pokemon Island for Professor Oak’s report. Unfortunately for Todd, it’s a lot harder than it looks.

5) AsapSCIENCE, “The Science of Goosebumps and Music Chills”

Goosebumps are fairly useless (we can thank our ancestors for that), but the raised hair from adrenaline allows animals to stay warm and make them appear more intimidating. However, the jury’s still out on why we get goosebumps from music.