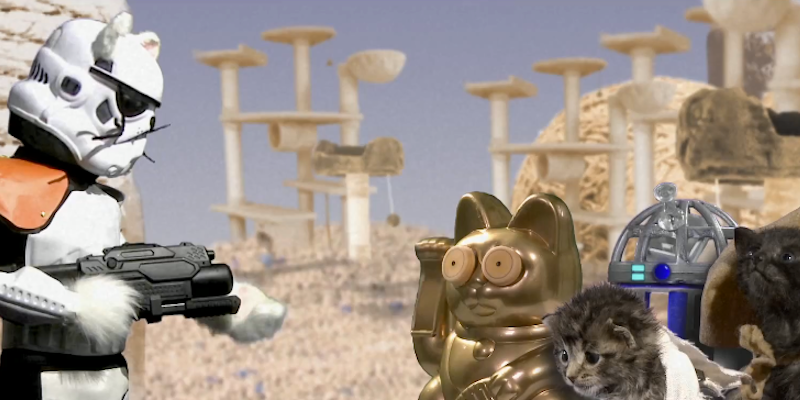 These are not the cat toys you're looking for.

These are not the toys you’re looking for. In a cat-filled parody of Star Wars, the two cats are stopped by “Poop Scoopers” looking for the robotic “Toiz.” The Force doesn’t really work on them, but luckily the new lightsaber does the trick.

Following someone on Twitter sounds a lot less creepy than following them around in real life. Rémi dressed up as Twitterrific’s Ollie—the famous bird that’s often mistaken for Twitter’s actual logo—and gets uncomfortably close to a number of people who aren’t fans. Too bad there isn’t a real life version of the block button.

3) AsapSCIENCE, “Childbirth vs Getting Kicked in the Balls”

The ages-old question of which gender has it worse when it comes to pain finally gets answered, but you might not like the response. Both experiences are painful, but it’s ultimately a subjective question with too many variables.

Jimmy Kimmel’s pulled the stunt on his show multiple times, but one reporter made his way to the NFL draft, made up a few players’ names, and asked fans waiting for tickets a few questions. The prospects don’t exist, but the fans had plenty to say about them.

Over two dozen movies are coming to theaters in the next three months, but who realistically has the time to watch them all? The best parts of those trailers are now cut together to save you a lot of time—and tells a different story in the process.