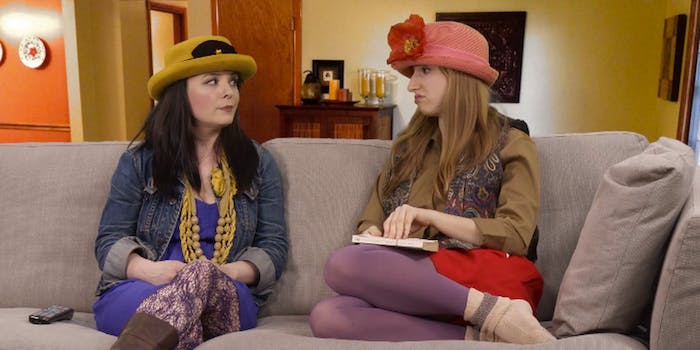 Blossom and Six are totally Hannah and Shoshanna.

Blossom and Six channel their inner Hannah and Shoshanna from Girls and discuss the things that really matter while channel flipping: dating shows, STDs, rehab, secret babies, and of course, their floral hats.

Most colleges, no matter how their sports teams do, have their own fight songs to play during games. In honor of March Madness, H.H. Gregg mashed together nine of the most iconic fight songs, performed with their own pep band.

The narrator may not be able to pronounce the title, but upon noticing that the entire movie is sung, he decides to sing the trailer as he breaks down the cat and mouse chase, lots of CGI crane shots, and extreme close-ups.

Many have tried their hand at making their own one-man band songs, but Jeremy’s attempt doesn’t go so well when his family interrupts his many takes and he ends up with a smoke baby at the end.

For all we know about the universe, there’s still so much more out there to see. Morgan Freeman tells us in his usual comforting tones that he wants us to go to space and explore the final frontier because we can do anything we can imagine.