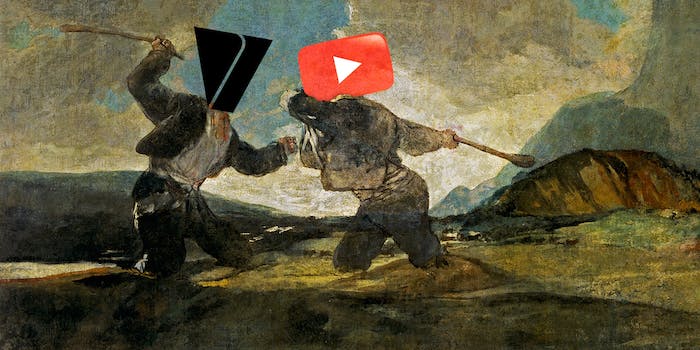 Two global conglomerates really can join hands and walk into the sunset together.

After a seven-year, billion-dollar court battle, Google and Viacom finally settled a copyright lawsuit over clips posted to YouTube.

The saga began when Viacom sued YouTube in 2007, after clips of Viacom shows were uploaded to the site between 2005 and 2008, allegedly without permission. YouTube claimed Viacom staff had uploaded clips in an effort to market shows from their various channels, such as Comedy Central and MTV, and that the lawsuit might have been an act of retaliation after the company tried (and failed) to buy YouTube in 2006.

In 2010, previously unreleased internal documents and emails between the two companies emerged, and court documents showed Viacom alleged YouTube made a “deliberate decision to build a business based on piracy.” YouTube countered that it was protected under the Digital Millenium Copyright Act, which offered “safe harbor” to websites containing videos uploaded by the public, as long as pirated material is removed quickly after being flagged.

The burden fell on Viacom to prove YouTube knew about the pirated material and left it up for profit. U.S. District Judge Louis Stanton sided with YouTube, but during court proceedings, YouTube did create the software that would lead to its Content ID system.

Last year, Stanton again ruled in YouTube’s favor and denied class-action status to copyright owners looking to sue YouTube over clips, saying that doing so would create a “Frankenstein monster posing as a class action.” On Tuesday, the two companies issued a joint press release on the case:

“Google and Viacom today jointly announced the resolution of the Viacom vs. YouTube copyright litigation. This settlement reflects the growing collaborative dialogue between our two companies on important opportunities, and we look forward to working more closely together.”

So a seven-year itch ends not with blood drawn but a possible business partnership, proof that two global conglomerates really can join hands and walk into the sunset together.

Reached for comment on what those future plans might be, Jeremy Zweig, Viacom’s vice president of corporate communications and corporate affairs, said he has “nothing more to disclose today about working together.”