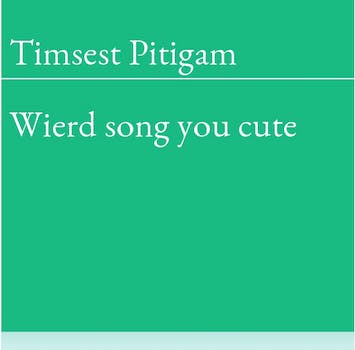 Creators Luc Gross and Bernhard Bauchshed hope to shed light on the bizarre world of Internet commenting, overrun with spammers and trolls.

Sparta my have. Wierd song you cute. Alot was been hard.

These are the literary classics of the Internet age, 40-page novellas that could have been penned by @horse_ebooks.

Thanks to Luc Gross, Bernhard Bauch, and an untold number of bots that scrape YouTube’s endless supply of mindless comments, the Amazon Kindle store is about to become overrun with titles composed of senseless dribble. The European-based digital publisher has joined forces with the media artist and programmer to flood the the online reading hub with an unlimited amount of nonsensical books that go for about $2 a pop.

“We programmed the bots to be completely autonomous,” the duo wrote Saturday afternoon.

“They are working uninterrupted through dislocated anonymized accounts. We are not even able to track the exact amount of generated books infiltrating the Amazon Kindle library. The results are self-published, human-readable ebooks in the form of classical dramas ready to be sold and enjoyed by a multitude of global readers, defining a new generative genre of digital literature: the ‘slang of YouTube.'”

Safe to say there won’t be too many linear plot lines running through this never-ending series. Here’s an excerpt taken from Sparta my have to give you a taste of what to expect:

“IM NOT TRYING TO ADVERTISE BUT IM SCARED OF WHAT IT SEES in 1908 a lady named sally rusa was in the woods looking for a dog until a ghost came and killed her so if ur reading this u will find a bloody body in your closet hanging there haunting you and will kill you and ur family and if u want to stop this just sends this to 6 videos in 30 mins or this will happen good luck!! and i only did this because it freaked me out o.o”

Gross and Bauch hope that the run of ebooks will give readers a laugh but also shed light on the bizarre world of Internet commenting, one that’s becoming more and more overrun every day with spammers and trolls:

“So-called ‘user generated content’ is a product created and consumed in the exchange of free labor managed with surplus information overflow. Giant Internet corporations exploit people’s ingenuity by trading contextual advertising. Users are the workers of a communication-junk factory, whose bytes are consumed by the producers themselves. By manipulating this exploitation, our system will give fair fame to the authors of those texts that clearly deserve a fair piece of the pie of this nonsense economy.”

The duo plans to unveil the full collection at an exhibition in Vienna on June 26, 2012. Invitations will be going out soon. No telling if they’ll pull information for the affair from a recent YouTube clip.