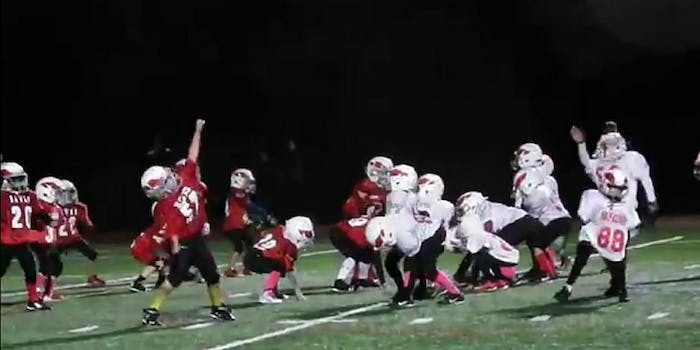 When coaching little children in youth sports, it’s not always so easy to guide their young minds to the task at hand. Either they’re too busy waving to their parents on the T-ball field to notice that it’s their turn to bat, or they’re too distracted by the fluttering butterfly to realize that a soccer ball has rolled right over their feet.

But if you add music to the equation—especially a popular dance number that has burned through our culture like a drought-aided wildfire—it’s nearly impossible to get them to focus, even when the ball is in play and one enterprising young man is sprinting for a touchdown.

Here’s what happened with the Milford (Massachusetts) Mighty Mites last week when Silento’s “Watch Me (Whip/Nae Nae)” began blasting from the PA system.

Those are some hellaciously good moves, and I imagine that kind of dancing talent will make up for the pain of allowing the other team—which also was engaged in doing the Whip/Nae Nae—to score an easy touchdown.

SB Nation broke down the percentage of kids who were attempting to play football and those who were interested in something else.

At some point, though, you have to wonder if the person in charge of the music at the stadium is just pulling a massive troll job, knowing that the kids would rather dance than play football. If that was the case, well done. You’re experiment worked just fine.