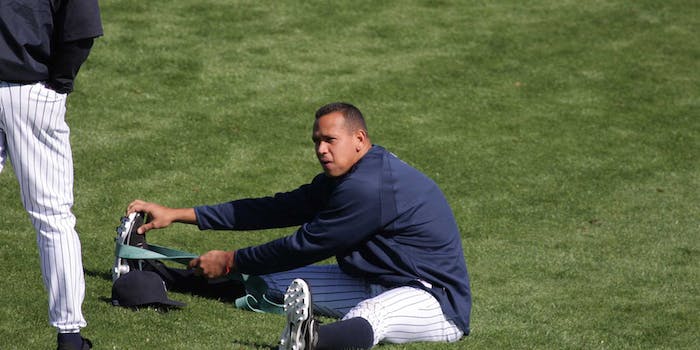 The Yankees third baseman and baseball's highest paid player is drawing heat from his employers for a tweet he sent out to his 41,000 followers.

Nobody can turn good news into bad news quite like Alex Rodriguez.

The Yankees third baseman and baseball’s highest paid player is drawing heat from his employers for a tweet he sent out to his 41,000 followers.

Benched since a playoff slump late last year, Rodriguez has spent all of the 2013 so far recovering from a hip surgery in January. On Tuesday, he tweeted that he’d finally been cleared by doctors to return to games.

Yankees General Manager Brian Cashman, however, wasn’t ready for the news to get out, and he sharply criticized his third baseman, saying that he should “just shut the f#ck up.”

“You know what, when the Yankees want to announce something, (we will),” Cashman told ESPN.com Tuesday evening, adding that he was about to call Rodriguez to discuss the issue.

The Yankee GM went on to say the news was premature because the team’s own medical staff had yet to clear A-Rod. He said that Dr. Bryan Kelly, who performed Rodriguez’s surgery and oversaw his initial rehabilitation, had no jurisdiction over deciding when the All-Star infielder would return to the field.

“There is always a chain of command with injuries,” Yankees Manager Joe Giardi told ESPN. “And there has to be. That is the process. It goes through our training staff, our doctors, our GM and then it probably get to me.”

The Associated Press reports Rodriguez is already playing in simulated rehabilitation games and that he’s expected to return sometime around the All-Star break in July.

Though he may be among the highest paid athletes in the world, Rodriguez is learning the perils of social media just like the rest of us. The three-time American League MVP joined Twitter May 31. The offending Tweet was just his ninth message posted on the site.

On Wednesday morning, he attempted to walk it back, saying through a spokesman that tweet was inappropriately made in a moment of “pure excitement.”

Though this may seem like a minor dust-up, it comes at an already tense time between Rodriguez and Yankees management. ESPN reports the relationship has been rocky since game one of the American League Championship Series last fall, when Rodriguez asked for a woman’s phone number in the stands during a game that the team would ultimately lose to the Detroit Tigers. He was pinch-hit for in that game and benched through the rest of the playoffs.

Things have gotten even worse since, as A-Rod was among the 20 or so players tied to the Biogenesis lab in Florida, which is accused of distributing performance-enhancing drugs to MLB players. Rodriguez faces a possible 100-game suspension if he is found guilty of violating baseball’s steroids rule.