Reddit user GeeJo answered nearly all of the 200-plus questions posed by the comic, just not in the way you'd expect.

Why are there ants in my laptop? Why do I say uh? Why aren’t there dinosaur ghosts?

These are just three of the more than 200 inquiries featured in Randall Munroe’s latest xkcd comic, “Questions Found in Google’s Autocomplete.” 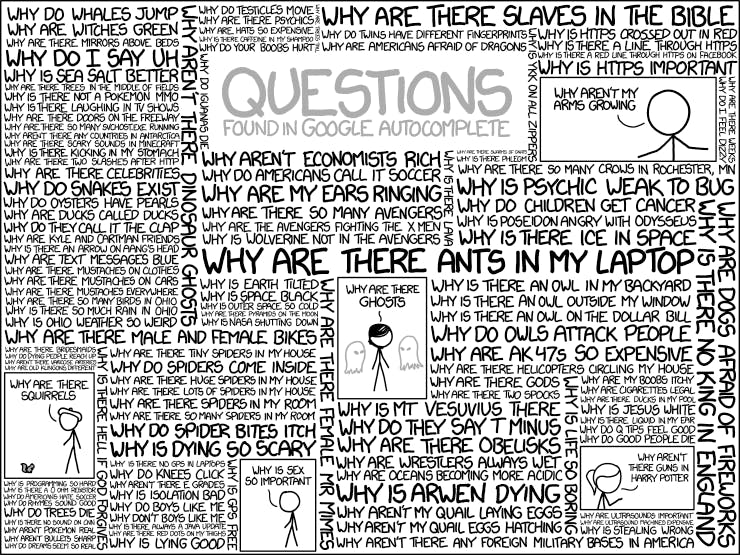 The questions inspired Reddit user GeeJo to go ahead and, well, answer them. But not in the way you’d expect. The responses are off the wall and nonsensical, like what would happen if Google searches were answered by @Horse_ebooks.

The following are the 10 best answers he or she compiled. The other 100 or so can be found on the profile page for GeeJo.

1) Why is there kicking in my stomach?

“[Y]ou know those sticks you can buy that you pee on and get one line or two? You might want to go and get one of those. And then schedule an appointment with a doctor.”

“One early treatment to rid the urethra of the pus buildup from gonorrhea was to strike both sides of the penis at the same time with both hands – a ‘clap’. Since men will try almost anything if it means their dick will stop oozing fluids that it’s not supposed to, and “clapping” was more of a temporary relief than an actual cure, doctors eventually moved on to injecting mercury or silver nitrate, then onto antibiotics when they became available.”

3) Why are there spiders in my room?

“Know what’s warmer and has better access to moisture than your house? Your open mouth.”

“Because, while there are similarities, Satoshi Tajiri is not a divine being, and so is incapable of transferring his ideas whole and intact from his imagination into the material plane.”

5) Why is there a red line through https in Facebook?

6) Why are there ants in my laptop?

“Did you flip a box of donuts into the air? Seriously? Do you want ants? Because that’s how you get ants. As a non-Archer answer – quit eating food when you’re using a keyboard. Crumbs and other orts will inevitably end up falling between the keys and the ants will move in to feast. Also, occasionally clean the thing out, they get disgusting.”

7) Why are there pyramids on the moon?

“The Nazis needed somewhere to keep their gold while they worked on rebuilding to conquer the Earth. In reality, apophenia is a hell of a thing.”

“This is a phenomenon called ‘speech dysfluency’. Again, no definitive answer but often explained as placeholders while you struggle to find the word you use next. If you mean ‘why uh as opposed to, say, quorpl’, different languages have different dysfluencies. You say uh/um because you speak English or another language that uses the same sound for this purpose.”

“I don’t personally shoot (living in the UK), but here are my immediate thoughts: with the amount of force behind a bullet, razor-sharp vs blunt points don’t generally matter in terms of penetration of a fleshy target. But let’s pretend they did. Whether because you’re avoiding the possibility of collateral damage or whether you just want to get maximum damage/stopping power out of your ammunition, you rarely want a through-and-through penetration of the target.”

10) Why are there moustaches on clothes?

“It’s an emerging trend associated with the whole irony/hipster thing. Entirely (or at least mostly) separate from actually growing moustaches as facial hair. I suspect it’s partly because of the current fetishisation of the late Victorian aesthetic (all the ‘sir’ing you see here on Reddit, the take-off of Steampunk, etc etc), but that’s a guess on my part.”