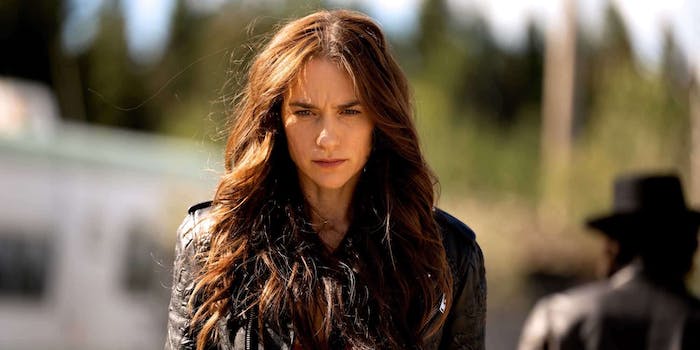 Fans paid for billboards and a van campaigning for the show's renewal.

The supernatural Western show Wynonna Earp was cancelled by Syfy this year, airing its last episode in March. But fans are still campaigning hard for its return, supported by the show’s creators. Right now, that campaign is ramping up in a big way.

Wynonna Earp fandom already has practice with this kind of thing, thanks to the #FightForWynonna campaign back in 2019. This saw fans pay for a Times Square billboard protesting the show’s potential cancelation, after season 4 was reportedly under threat at Syfy. Season 4 aired this year, and the creative team are hoping to get picked up for season 5 with a different distributor.

That’s where the #BringWynonnaHome campaign comes in. Kicking off in February, this campaign rapidly evolved from a hashtag to a full-blown movement with attention-grabbing publicity stunts. The latest involves billboards and a Wynonna Earp van driving around L.A.

Wynonna Earp earned very positive reviews overall, but as ever, critical success is just one (arguably minor) component of whether a show gets renewed. In this case, the cancellation was attributed to financial problems behind the scenes. So if Wynonna Earp‘s production company can find someone else to pay for season 5, there’s still some hope.

As a female-led genre show with several queer characters in the main cast, Wynonna Earp is in a unique position on American TV. While a lot of mainstream TV fandoms are dominated by male/female and male/male ships (for instance Supernatural and The Witcher), Wynonna Earp includes canonical f/f romances. Plus the show’s creators enjoy a warm relationship with the fandom, which isn’t always the case. This atmosphere creates the kind of dedicated fanbase that money can’t buy, which could be a selling-point for any potential distributors.

In recent years, we’ve seen a few successful fan campaigns along these lines, most notably The Expanse on Amazon, and the Snyder Cut campaign. But in those cases, there were secondary concerns at play, like Jeff Bezos being a fan of The Expanse, and Warner Bros. utilizing the Snyder Cut to promote HBO Max. Campaigns like #BringWynonnaHome rely on faith, keeping the fandom spirit alive while negotiations take place behind closed doors.