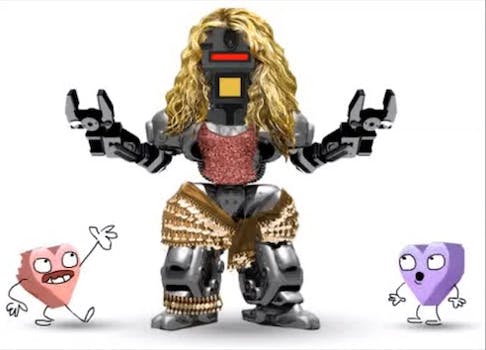 Valentine's Day: a time for romance, overpriced candy, and music from Brent Spiner.

Valentine’s Day: a time for romance, overpriced candy, and music from Brent Spiner.

Creators of some of the most WTF videos on YouTube do not limit their focus to the Christmas season. In this all-new batch of footage, some of the world’s most bizarre people celebrate their love—or hatred—of Valentine’s Day.

From rappers to talking poodles, the following Valentine’s-related videos serve as further proof that not everyone should be allowed to own camera equipment and YouTube accounts.

While user biggydman’s character “Zeke” is obviously fictionalized, it does not reduce the creepiness factor of his Valentine’s Day greeting. Resembling a mid-1980s bastard love child of John Candy and “Weird Al” Yankovic, Zeke, with his grill and everything, stares into the camera and professes his love for his valentine, “Nicole.”

Shirtless rapper “OGFurious” shares his thoughts on Feb. 14 in this 2011 video. While half-naked, swear-spewing, wannabe Eminems are of course just as entitled to their opinions as anyone else, OGFurious cannot seem to keep his focus on the subject at hand. His rant bounces back and forth between chastising Cupid for his chosen profession and denouncing various popes throughout history.

This video, starring the two personalities behind the YouTube account GlitchFixer, clocks in at just over two minutes. However, it only takes about 15 seconds for each person’s stance to become clear, thus filling the remaining time with needless elaborations and restatements.

A suburban couple realizes that everyone’s favorite Feb. 14 holiday really is really for the dogs. As the camera rolls, their overly excited pup Corky manages to pop not one, but two helium Valentine’s Day balloons.

YouTube creators, if you learn nothing else about amateur filmmaking, at least know this: You cannot go wrong by opening a video with an animated conversation heart playing the ukulele. Producers have yet to confirm this, but the reason audiences despised Star Wars Episode I: The Phantom Menace was because it lacked such an opening.

When it comes to romantic melodies, forget Nat King Cole, Mariah Carey, and Psy. Instead, treat your ears to the vocal stylings of none other than Brent Spiner, the character actor best known for his portrayal of android Data on Star Trek: The Next Generation. As his cover of “It’s a Sin to Tell a Lie” plays in the background, still photos from the series—now with lip-moving goodness—sing along to the lyrics.

And here you thought Star Trek: Nemesis was what ruined the magic of TNG for you.

This video is literally little more than Cupid firing arrows into unsuspecting people, causing them to fall for—well, to—the ground. Starring what is perhaps the most hideous interpretation of the Valentine’s Day mascot, you will actually look forward to random strangers being knocked senseless.

Bobby Flay, Emeril, and even Gordon Ramsey have nothing on the biggest name in (Japanese) cooking: Francis the dog. With his assistant, the poodle, speaking in perfect broken English, takes the viewer through a thorough lesson in creating Nama Chocolate.

What is your favorite love song?

If your YouTube username is Weston Flippo, it is Bobby Pickett’s famous tune “Monster Mash” (which is far more romantic than anything Justin Bieber or Taylor Swift have ever sung)—and it is set to a still frame from The Simpsons.

In the Simpsons episode “I Love Lisa,” class nobody Ralph Wiggum is given the punny Valentine “I Choo Choo Choose You” by Lisa Simpson, who takes pity on him. Ralph of course interprets this as a crush and is ultimately rejected in public by Lisa later on in the episode.

If you watch this video long enough (and are familiar with the episode’s ugly turnout [and have been drinking]), you can almost sense Ralph Wiggum snapping at the mockery and turning his ire on Springfield Elementary.

Teddy bears are typically the animals most people use to profess their love on Valentine’s Day. Chickens are unfortunately overlooked.

YouTube user SjN85 felt that such an injustice shouldn’t go on any further and created the “Chicken of Love.” The moniker sounds like some sort of 1970s kitchen pornography but is, in reality, something far more WTF than that.

If you are like YouTube user Camila Souza and (presumably) Patrick Barker, you are no doubt aware that love is best expressed by a slimy reptile.

A live turtle (which is a big step up from SjN85’s animated chicken) slowly makes its way from one side of the screen to the other, carrying a special message.

The jury is still out on whether the gap-toothed host of this video is merely drunk or utterly stoned. A short tour of the house he bought—well, rented—is interspersed with his random-neural-firings-laden speech that uses the words “Valentine’s” and “intoxicated” quite frequently.

We then cut away to the exceptionally romantic melody “I Wanna Be a Cowboy” playing over everything from a beg for donations to the “glory expedition” to a sunflower.

After the cards, dinner, and other Valentine’s Day traditions are over, many couples properly mark the calendar’s most romantic date with some bedroom fun.

Like relationships and attempts at romance, all good WTF things must come to an end. At least, this is how whycantihavespaces’ video understands things.

In this fright-inducing stop-motion animation sequence, the date of February 15 is explained by a stuffed bear that looks like it was fished out of a thrift shop’s “free” bin. Don’t watch it at night.