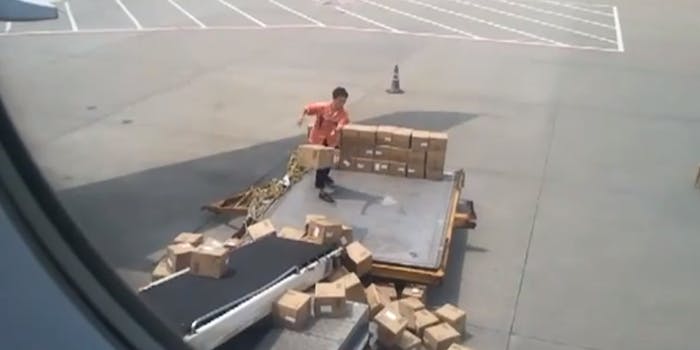 Is this the worst airplane loader in the world?

Handle with care? Fragile? This dude clearly does not care.

There’s an old adage that claims “the lazy man works the hardest.”

Proof can be found in a year-old YouTube video that just surfaced via Reddit. In it, an unidentified freight handler can be seen haphazardly tossing packages from a flat bed onto a conveyor belt at China’s Guangzhou Airport. Captured from within the airplane, a handful of passengers can be heard laughing and chatting in Chinese as they watch packages bounce off the conveyor belt and onto the tarmac.

“I think I was the only one noticing what was happening outside the window of the plane, and this time I captured it,” YouTube user Mark Bridgman wrote in the video’s description. “On a previous occasion I saw a load of Japanese sewing machines with ‘this way up’ and ‘fragile, handle with care’ stickers over the boxes also being thrown onto the conveyor.  Lesson: Pack it well, because it won’t be treated well.”

The video has been viewed more than 72,000 times, while the Reddit thread has collected more than 500 comments.