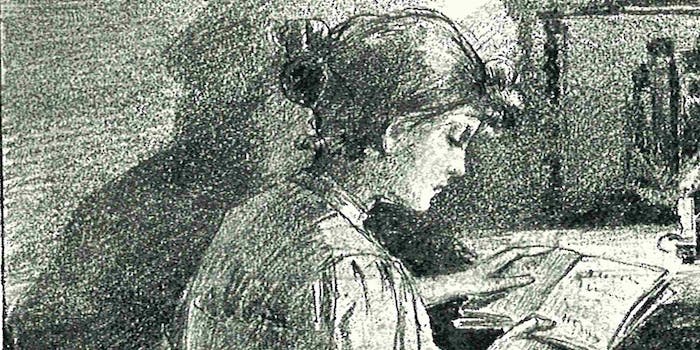 Wikipedia’s list of American novelists leaves women out to dry

This is why Wikipedia’s huge gender imbalance matters.

“The category lists 3,837 authors, and the first few hundred of them are mainly men,” Fillpacchi wrote. “The explanation at the top of the page is that the list of “American Novelists” is too long, and therefore the novelists have to be put in subcategories whenever possible.”

Since Fillpacchi’s op-ed was published Tuesday in the New York Times, Wikipedians have rushed to fix the problems. But at the time she wrote it, Fillpacchi noticed some very big names shorn from the list, including Harper Lee, Amy Tan, and Anne Rice. Fillpacchi continued:

All told, more than 300 women novelists had been segregated to their own little Wikipedia list ghetto. The only women remaining were those whose last names began with letters a little farther down in the alphabet, giving credence to the idea that this was a systematic process.

Presumably, if any female editor had stumbled across the list, she might have noticed the problem, but Wikipedia has very few female editors. Only 10 percent of the site’s editors are women. The gender gap affects Wikipedia in countless ways. There is, for instance, a voluminous article on nearly every distribution of the operating system Linux, but Wikipedians deleted an article on Kate Middleton’s wedding dress, declaring it not notable enough for an encyclopedia with 4 million entries. Fillpacchi’s discovery is probably the most glaring example of how Wikipedia’s gender balance has serious consequences.

“It’s probably small, easily fixable things like this that make it harder and slower for women to gain equality in the literary world,” Filipacchi wrote.

On the Talk page, one Wikipedian accused Filipacchi of cherry picking. Many of the authors listed, he noted, belonged to a dozen other categories: “This appears to be a simple case of false dichotomy,” Wikipedian Noren wrote. “An author can be added to or subtracted from each these categories entirely independently, but that op-ed makes it sound as if a given author is in just one category and the author’s entire article was demoted because it was added to the category ‘American women novelists.'”

He continued: “If I wanted to make the argument that Wikipedia discriminated against male Science Fiction authors I could cherry pick a bunch who aren’t included in this category.”

One half of the human race—and male science fiction writers. No sexism here, folks.

To their credit, others have been quick to admit the status-quo is not acceptable. Many of the literary giants that Fillpacchi noticed were excluded from the main list have returned. And Wikipedians have, at long last, created an American men novelists category, though, so far, it has only two entries.