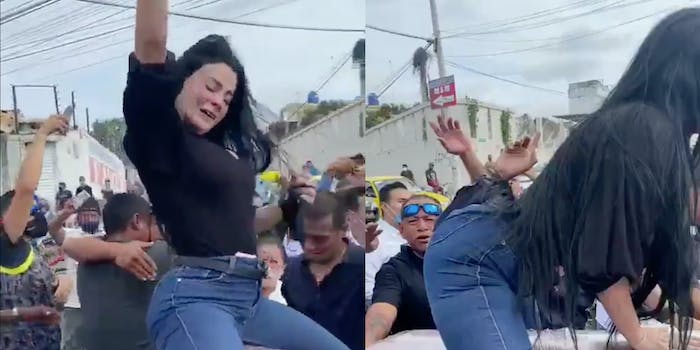 It's one heck of a sendoff.

A video of an unexpected funeral celebration is making waves online. In the video, a group in an apparently Latin American country can be seen surrounding an outdoor casket. The wooden coffin is propped up on two motorcycles and wrapped in some kind of plastic. The short clip shows a woman, dressed in a black shirt and jeans, twerking atop the raised casket.

Over the course of just over 20 seconds, the woman grinds and gyrates in front of a celebratory crowd. Twice, she leans forward to plant a kiss on the glass covering between she and her loved one.

The viral clip was originally shared by Twitter user @OutSmokeChapo. In the three days since it was shared, the 23-second video has racked up 16,500 retweets and nearly 93,000 likes. The original poster even shared a link to the admittedly catchy song, “Ella Quiere Hmm” by DJ Yayo, Leka el Poeta, and Mishell Master Boys. “If yo girl don’t do this at yo funeral is she really yo girl,” he captioned the tweet.

People in the comments were split in their reactions to the video. Several people noted the genuine distress visible on the woman’s face and applauded her for sending her loved one out in style. Other’s found the entire affair disrespectful and criticized the funeral attendees for appearing to celebrate the dance.

It is notable that funerals come in many shapes and sizes. Not all are somber affairs. In Apri, a clip of dancing pallbearers from the African nation of Ghana went viral. People were struck by the clip, which quickly transformed into a popular meme. In America, funerals are often dark and tragic events, rather than the celebrations of life that can be found in some areas of the world.

As many commenters pointed out, we all mourn differently. Who are we to judge how another person chooses to send off a lost family member, friend, or partner?