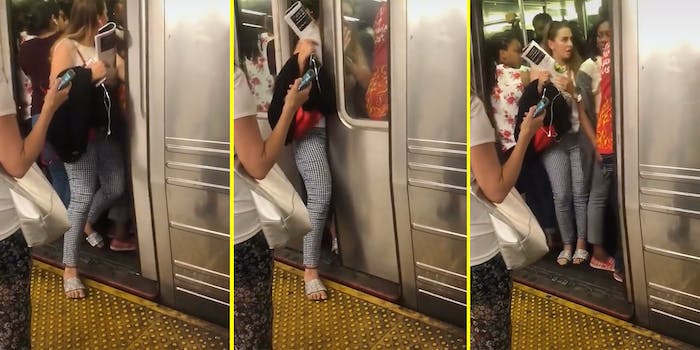 'She did what was necessary.'

The New York subway is known for being an every-person-for-themselves kind of place, but a recent TikTok video showing a woman cramming herself into an overstuffed train has people debating if there are limits to that notion.

In the TikTok video, a woman carrying a magazine and coat shoves her way onto a packed train. She is met with some pushback from at least one person already on the train, who does her best to physically push the woman out. Half of the woman’s body is outside the train when the doors shut, but she ultimately manages to successfully wiggle her way inside.

“NYC subway be like,” the caption on the clip from @d.fyp, which dubs itself the “#1 meme page,” reads. The video has been viewed over 2 million times since being posted on Friday. Nearly 3,000 comments also poured in.

While the behavior seen in this video would’ve earned a person the “Karen” moniker anywhere else, viewers took into consideration that it was filmed in New York. “I know that right,” one said, approving of the woman’s actions.

Some, however, felt the woman was in the wrong. “She tried to fit in the train and was pushing people and then had the audacity to look annoyed when she got pushed back,” one said.

Still, many viewers took the moment to remind critics that this happened in New York. “You obviously not from New York,” one wrote in response to “The people saying she could of waited for the next train.”

“I’m from NYC and she did what was necessary,” another commented.

And at least one viewer felt neutral about the situation, saying, “They both wrong.” “She wrong for trying to squeeze in that tiny space and the other wrong for pushing her,” they added.