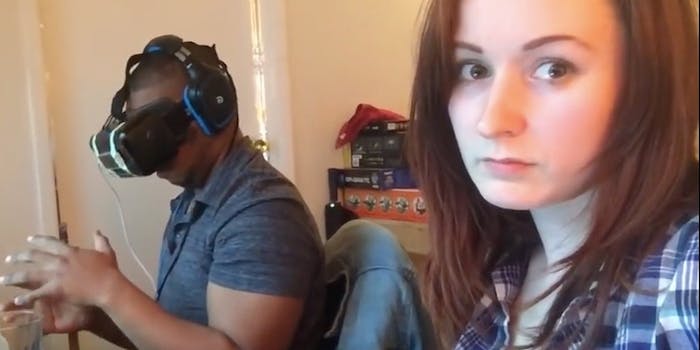 She actually works in VR, but knows these headsets look ridiculous.

A couple of weeks ago, a viral video seemed to capture the sorry state of relationships in an age dominated by technology. A woman grimaces into the camera as the man next to her grasps some invisible object, immersed in whatever he’s watching on his ponderous virtual reality headset. It went viral because it read as a contemporary tragicomedy, but the woman in the video says it wasn’t what it seemed.

In a Medium post titled “I love VR but hundreds of thousands of people think I hate it,” Eva Hoerth provides some context for her widely misunderstood video. Hoerth works in the VR industry. She’s not a put-upon girlfriend, as many assumed. The guy in the headset is one of her coworkers.

Hoerth’s essay is worth reading in its entirety, but here’s the key point: She agrees that today’s VR headsets are ridiculous, and she films people interacting with them because they’re going to seem even more ridiculous in the future—when we develop the “fanny packs of VR.”

“I want our grandchildren to laugh and be thankful that they can just play around with holograms anywhere they want without spending hours setting up mountains of cables or battling with eye strain/vomiting,” Hoerth writes.

But the video wasn’t just about clunky technology. It also spoke to a widespread fear that VR will be totally antisocial, everyone lost in their individual virtual worlds, with no time or attention to waste on, like, girlfriends.

“From the outside, VR might look silly and isolating, but you really can’t judge it until you experience it yourself,” she wrote. “Plus, there is a continuing growth of startups that are focusing on the social, empathetic, productive, and educational use cases for VR.”

Take that with a grain of salt coming from someone in the VR industry, but also consider we’re always skeptical of technology when it’s in its gawky, early stages. Sometimes that tech grows up to become socially acceptable (remember how people predicted doom for the iPad at first?) and sometimes it doesn’t (lol Segway).

Hoerth’s video was so popular, and so hilarious, because it perfectly captured public opinion about VR headsets in 2016: They’re basically Segways for your face.

But maybe, one day, they’ll be iPads for your face. Then we’ll all look back and laugh at the time we thought virtual reality had doomed us to an empty, sexless future.