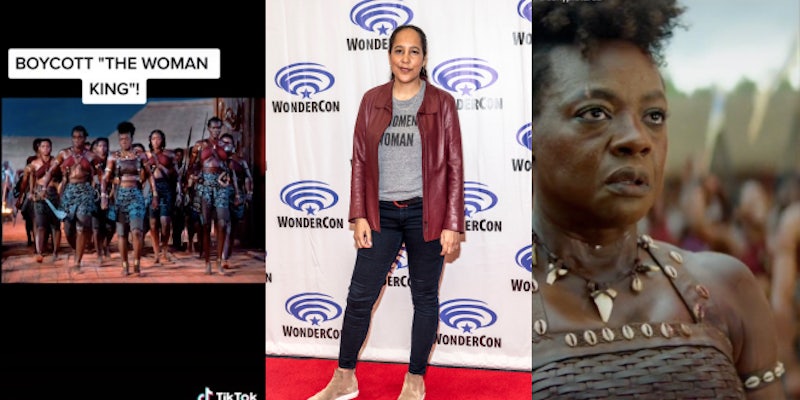 #BoycottTheWomanKing: Why 2022’s biggest historical movie is also its most controversial

The Viola Davis action epic 'The Woman King' is facing criticism for its inaccurate depiction of the transatlantic slave trade.

The Woman King is earning a lot of positive buzz this week; a 19th-century historical epic starring Viola Davis as a Dahomey general who leads an army of female warriors, the Agojie. The film is being praised for its action scenes, and for the way it places Black women in powerful, complex lead roles.

However, it’s also faced criticism for its historical inaccuracy, with detractors saying The Woman King erases the Dahomey kingdom’s true role in the transatlantic slave trade.

While the story is framed as an empowering drama with Viola Davis playing a hero who pushes back against the slave trade, the Dahomey kingdom actually gained much of its wealth from selling people into slavery. The Agojie were direct participants.

The Woman King sparked divisive reactions within days of its release, with some calling for a boycott. As positive reviews rolled in, The New Yorker published an in-depth critique of the film’s historical inaccuracies, saying that it “crosses the line from reasonable fiction into cynical distortion of history” by re-framing the Agojie as anti-slavery heroes. (Smithsonian Magazine also published an explainer on the film’s real-life origins, discussing the Agojie’s brutal reputation and the real reason the Dahomey kingdom ceased its involvement in the slave trade.)

These issues are further complicated by The Woman King’s conflicted Hollywood backstory, including the years-long battle to greenlight a historical blockbuster starring Black women – along with Lupita Nyong’o’s departure from a key role.

Nyong’o (who starred in Black Panther, whose dora milaje warriors were inspired by the Agojie) visited Benin and filmed a documentary about the Agojie after being cast in The Woman King. Many people suspect this experience led her to quit the film, after learning more about the Agojie’s role in the slave trade.

There are several viral tweets and TikToks attempting to spread the word about the Dahomey kingdom’s participation in slavery, but others argue the film has a positive impact. The Woman King’s fans emphasize its entertainment value, and the cultural importance of seeing Black women in strong, high-profile roles—particularly given the dearth of big-budget movies about African history.

Essentially this is a conflict between those who believe these historical inaccuracies are a serious ethical problem, and those who see The Woman King as a positive step for representation in Hollywood. In a genre typically dominated by white men, the roles played by Viola Davis, Thuso Mbedu, and Lashana Lynch feel groundbreaking and exciting.

The film’s defenders also point out the prevalence of historically inaccurate movies with white leads. We’re used to watching British dramas that whitewash or glorify the British Empire, not to mention heavily-fictionalized action epics like Braveheart and Gladiator—both of which influenced The Woman King.

The argument here is that blockbusters aren’t history lessons, and The Woman King shouldn’t be penalized for something that’s already a common problem in Hollywood. But this particular debate is more contentious than a typical argument over historical details—both because the topic at hand is slavery, and because many see the boycott campaign as an attempt to sabotage the work of Black women.

As this discourse unfolded online, director Gina Prince-Bythewood responded in an interview with Indiewire. “I learned early on you cannot win an argument on Twitter,” she said. “And I know all of that is going to go away once they see the film.”

Producer Cathy Schulman also defended the film’s viewpoint as an African perspective on this historical period, saying, “I’m a big believer that information is power, and I think that understanding issues surrounding slavery from the standpoint of the African perspective is relevant. We look at it most of the time from what happened once these people were enslaved and were actually landing here in America versus what was going on on the other side.”

Neither of these comments will satisfy the critics who object to The Woman King on ethical grounds. However, these detractors still appear to be in the minority. Judging by the responses to The Woman King on social media and Letterboxd, the calls for a boycott are outweighed by people praising the cast’s performances and Prince-Bythewood’s skill as an action director.