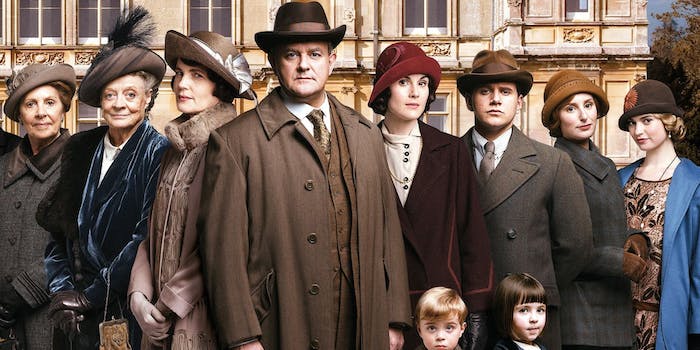 Shows like 'Downton Abbey' and 'The Crown' present a racist, inaccurate vision of history.

As support grows for police abolition, the overton window is shifting for how we view fictional police as entertainment. There’s an increasing awareness that crime dramas act as copaganda, endorsing police brutality and portraying law enforcement as efficient, heroic protagonists.

As a critic who covers TV from both sides of the Atlantic, I expect to see an awkward scramble for American cop shows to “tackle current events” next season. (This will be deeply embarrassing, because most crime dramas are beyond redemption. They can’t just admit their heroes are championing a racist system.) I’ll be more surprised if this happens in the U.K., where crime TV is equally popular, but public opinion hasn’t shifted as much. Instead, more attention may go to Britain’s whitewashed historical dramas, which serve a similar purpose in misleading the public. Nostalgic, white-centric historical fiction is ubiquitous in the U.K., and its impact is visible in the response to Britain’s protests, which are sparking a culture war about the legacy of the British Empire.

Thanks to a school system that prioritizes World War II and long-dead English monarchs, many Britons barely know about the country’s history of slavery and violent, exploitative colonialism. A recent YouGov poll indicated that almost a third of Brits thought the Empire was something to be proud of. Only 19 percent felt ashamed. By pulling down the statue of slave-trader Edward Colston in Bristol last week, Black Lives Matter protesters kick-started a national conversation about Britain’s reverence for dead racists. The backlash was immediate and overblown, with conservative politicians demanding 10-year sentences for vandalism. Several monuments were given protective shielding, including a famous Winston Churchill statue being covered by a giant grey box. The symbolism was comically blatant: the government cares more about the safety of a lump of rock than the wellbeing of actual living humans, in a city suffering from rampant inequality and violent policing.

Last weekend, thousands of far-right protesters traveled to London’s Parliament Square to defend the statues from a nonexistent threat, resulting in a booze-fueled riot. The prevailing images are of racist “football lads” fighting the police and throwing Hitler salutes, and a white man pissing beside a memorial to a police officer. He admitted to drinking 16 pints before joining the protest, and he wasn’t sure which statues he was there to defend. A perfect example of Britain’s far-right movement: fanatically obsessed with the concept of “history,” without knowing what that history actually is. No wonder they love statues so much. All a statue tells you is that someone used to be rich and powerful, and in the U.K., those statues mostly depict white men. The anti-BLM protesters were defending a heavily fictionalized vision of British “greatness,” bolstered by a government that destroys records of colonial crimes overseas, and a pop-culture landscape that rarely portrays the British Empire in a negative light.

In popular fiction, the Victorian era is an atmospheric world of Sherlock Holmes, Jack the Ripper, and steampunk—not a period of exploitation and murder perpetrated by British forces. You don’t see British imperial equivalents of Chernobyl or Watchmen, because Britain is in denial about its part in atrocities like Boer concentration camps and the Opium Wars. Our historical dramas often touch upon class divides, because British people are obsessed with class. But these stories invariably focus inward, offering a sympathetic eye to aristocrats who got rich through the slave trade and stolen land. We have countless TV shows about Regency love stories and WWII heroism, and none about the dark backstory behind Britain’s stereotypical cup of tea. Few acknowledge the lives of non-white people who thrived here for centuries; a self-fulfilling loop of historical erasure. Again and again, we’ve seen the same backlash about people of color appearing in historical fiction from Doctor Who to Shakespeare adaptations, because white conservatives view their existence as “unrealistic.” Things are the same on the big screen: Dunkirk, The King’s Speech, The Darkest Hour, The Theory of Everything, The Imitation Game… you get the picture.

Over the past decade or so, the casting for historical dramas has grown more diverse. More people of color are getting lead roles, including those that previously went to white actors: royals, Shakespeare characters, and the stars of adaptations like Les Miserables. But this is only half the battle. While a handful (and it is still just a handful) of historical dramas opt for raceblind casting, this only expands the range of available roles within the existing system—a system that buys into the Great Man theory of history and loves to remake the same roster of literary adaptations by white authors. There is no Black equivalent of Downton Abbey, and it’s vanishingly rare to see the British Empire portrayed as an explicitly oppressive institution.

Escapist fiction offers us a vision of a better, easier world. We enjoy crime procedurals because they find logical, satisfying solutions to ugly problems. We enjoy historical dramas because of the pretty costumes and the emotional fulfillment, removed from the drudgery of real life. But these “better worlds” aren’t aspirational. They’re illusory, and that illusion can mess with our heads. In cop shows, we’re encouraged to believe that the police are fundamentally good—or at the very least good at their jobs. In the vast majority of British historical dramas, we’re led to believe that rich, white people were at the center of the universe. Their struggles revolve around love affairs and exciting feuds over inherited power, with no hint of the iceberg of horrors supporting the glamor above the surface.

These fantasy worlds aren’t the same as something like Star Trek, where political themes are foregrounded in an obviously fictional setting. Marketed as an accurate view of real events, the political message of The Crown is more insidious, humanizing the royal family while ignoring the cruel impact of their hoarded wealth. Downton Abbey is an even worse offender, desperate to rehabilitate the image of English aristocrats. And of course there’s no hint of raceblind casting for these top-tier prestige dramas and biopics, which is far from a neutral choice.

Historical dramas are a key source of employment for white British actors, the most successful of whom have a lot in common with the aristocrats they play onscreen. Eddie Redmayne attended Eton with Prince William. Tom Hiddleston and Damian Lewis also went to Eton, and are descended from lords and baronets. Benedict Cumberbatch comes from a family of wealthy slave-owners. When embarking on his acting career, Cumberbatch’s mother advised him to change his surname or “they’ll be after you for money.” She was referring to reparations. Needless to say, his public image did not suffer. He went on to play numerous Great British Men, because he falls into the correct demographic. Meanwhile, Thandie Newton, a Black British actress, said she had to move to America to get decent roles. “I can’t work, because I can’t do Downton Abbey,” she explained. “Can’t be in Victoria, can’t be in Call The Midwife—well, I could, but I don’t want to play someone who’s being racially abused.” The system feeds into itself, elevating white people both onscreen and in reality, erasing people of color, and maintaining a grossly flattering view of the British Empire. It’s easy to see why Britons have such a myopic opinion of their own history, and the very real impact it has on politics today.