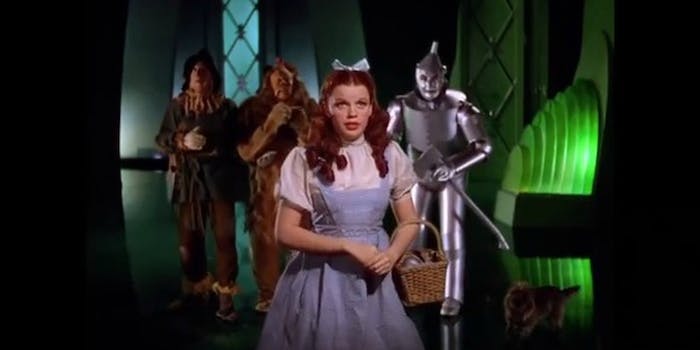 The Jackson Generals will wear uniforms for one game this season that Dorothy from the 'The Wizard of Oz' would find awfully familiar.

Gimmicky major league baseball jerseys usually are pretty obvious. You get the occasional 1980s throwback or the one that honors the Negro Leagues or, depending on the country’s current foreign policy, the camouflage jersey.

Those uniforms are fun, but those relatively safe choices are one reason you should be paying attention to the minor leagues. Because some of the gimmicky jerseys in the lower levels of baseball are ridiculously awesome.

On May 15, when the Generals do battle with Biloxi, they’ll be aided by one of the most iconic movie costumes of all time. And just because it’s the blue gingham dress of a girl named Dorothy doesn’t make the look any less fantastic. In fact, the pigtails and the delicate hair ribbons that match the dress’ pattern are what make the uniform all the more phenomenal.

Is this the best baseball uniform ever? You make the call.

Click your heels together and say "There's no place like @jacksongenerals Wizard of Oz Night" It's happening 5/15 pic.twitter.com/QZoxXKWibH

You could say, “We’re not in Kansas anymore” with these uniforms. Or you could say that lions, tigers, and bears would be scared of anybody wearing that jersey. Or you could see these jerseys arrived in a hot-air balloon from somewhere over the rainbow. Or talk about how there’s no place like home. Or something about tornados or witches or your little dog, too.

But me, I don’t like to write clichés, so I’ll avoid all of that.

Instead, I’ll let the Jackson Generals official blog have a word: “Not many teams venture into the realm of classic Judy Garland films for their theme nights. It’s pretty cool that the jerseys got so much attention. We at the office put in a lot of hard work trying to come up with fun promotions that will help people have fun at games, and the reaction to our first Wizard of Oz Night mostly validated that hard work.”

Apparently, though, there were some negative reviews of the announcement. Which were countered nicely by Brandon Shields of the Jackson Sun. From his column:

There are worse things in the world than a baseball jersey with pigtails on it. Your house could be hit by a tornado. That house could land on you leaving nothing of you visible except your very tall black and white socks (another uniform suggestion?). Or you could wake up one morning to a world in Technicolor after taking a hit in the head and losing consciousness in the safety of the black and white world you already knew and were comfortable with.

And if that’s the case, hopefully those kinds of people would go to sleep, wake up early the next morning and discover it was all just a bad dream.