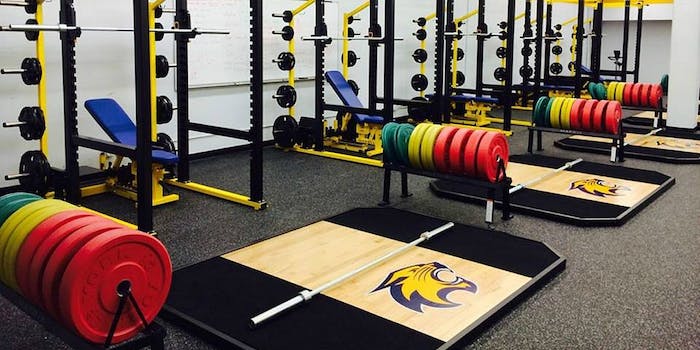 The school district really should have seen this coming.

A middle school in River Falls, Wisconsin, simply wanted a new workout room. But Meyer Middle School accidentally gave its fitness center one of the worst names of all time.

The school started a fundraising drive for the new room, and thanks to a man named Roger T. White, it met its $100,000 goal. Because of White’s outsized role in funding the facility, it made sense to name the new fitness center after him.

So it was that Chuck Eaton, the head of the fundraising committee, announced that the facility would be known as the “Roger T. White Pride Fitness Room As Presented by RCU (Royal Credit Union).”

A little awkward to say? Sure. Could it use some shortening? Of course. And that’s where the school got into trouble. Because the name it chose for informal use was “the White Pride Fitness Room.”

Yeah. That’s not such a great name—at least, assuming the people who use the facility aren’t white supremacists.

Now, a discerning individual would recognize the mistake and understand how it came about, but some social-media users immediately clucked their tongues, including one who said, “This is terrible. White pride? Which culturally insensitive committee let this slide? So much for building an inclusive community…”

That led to this lengthy response from the River Falls School District.

So the inadvertently racist name has been changed and Roger White is still being honored for his financial contributions. Hopefully, that makes everyone happy.

Well, except for one person. Now that the name has been changed, where the hell is Pantera’s Phil Anselmo supposed to work out?