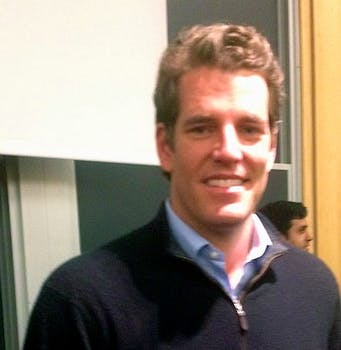 The Winklevoss twins just lost millions in the Bitcoin crash

Cameron and Tyler Winklevoss, famous for suing Mark Zuckerberg over Facebook, have invested millions in the virtual currency.

Cameron and Tyler Winklevoss, best known as those twins who repeatedly sued Mark Zuckerberg (claiming he had stolen their idea for Facebook), have now been revealed as massive Bitcoin speculators.

Since last summer, the New York Times’ Dealbook blog reports, the twins have been buying up the digital crypto-currency, currently in freefall. (A couple of days ago it reached $266 per bitcoin; today’s low is under $50.)

Thursday morning, when trading was stopped by Mt. Gox—the most popular Bitcoin exchange—at about $120, the Times estimated the Winklevoss’s Bitcoin fortune at $11 million. If that estimate is accurate, their holdings had reached a value of $24 million at the high point. Currently, it is worth a bit over $2 million. That means they’ve seen a loss of up to 92 percent of their investment.

Bitcoin is a non-fiat electronic currency, which has assumed an outsized profile internationally due in part to attention on Cyprus’s banking emergency, its inclusion in the American financial regulatory framework, and press coverage, which increased exponentially along with Bitcoin’s value.

“People say (Bitcoin is) a Ponzi scheme, it’s a bubble,” Cameron Winklevoss told the Times. “People really don’t want to take it seriously. At some point that narrative will shift to ‘virtual currencies are here to stay.’ We’re in the early days.”

“We have elected to put our money and faith in a mathematical framework that is free of politics and human error,” added Tyler Winklevoss.

Mt. Gox, handling about 80 percent of Bitcoin trades globally, has been under distributed denial of services (DDoS) attacks for a week. When Bitcoin slid into panic-sale mode, orders dragged to over an hour, partially due to the DDoS, but also due to the company’s inability to handle a sudden massive onslaught of new users.

Mt. Gox decided to shut down their services for 12 hours. When it opened back up, it was the immediate target of an even fiercer DDoS attack.

The volatile environment, compounded by the difficulty in buying and selling via the world’s largest exchange, has kept the currency on a downward trend.

Bitcoin believers predict such “downward corrections” will eventually even out, that the factors affecting its volatility will eventually calm down and that Bitcoin, like most financial advisors say about investing in general, should be bought for the long term, not for short-selling.

We’ll have to see how the major players, like Mt. Gox, deal with scalability and security issues before we can put paid to that idea.

CORRECTION: This article originally featured a photo not of the Winklevoss twins, but of Irish pop duo Jedward—who, as far as the Daily Dot is aware, have not invested in Bitcoin. We regret the error.