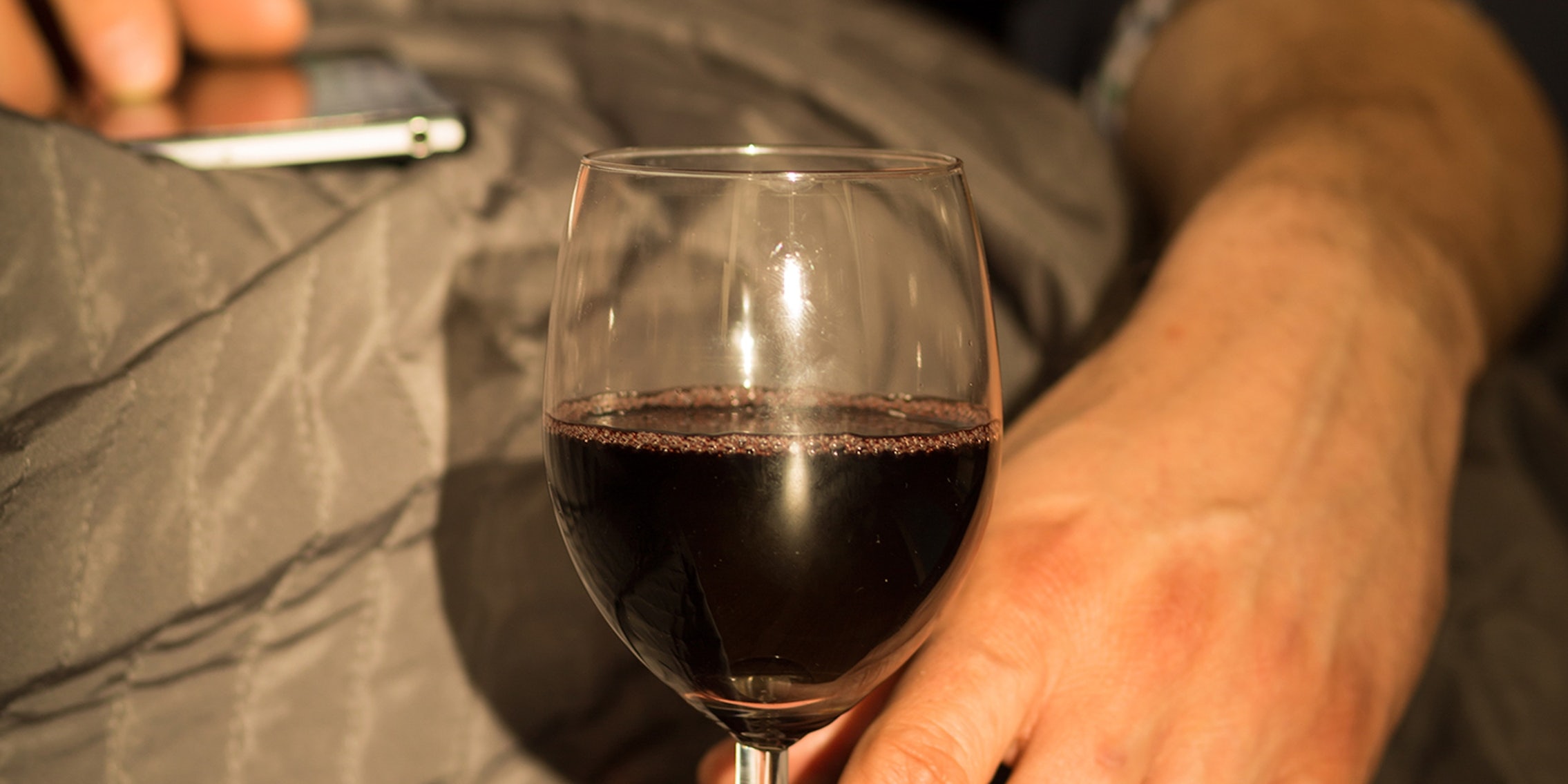 The refined, sophisticated art of dipping your d**k in wine

Putting the 'weenie' in 'oenophile.'

Are men really dipping their dicks in wine and discussing it in an online forum dedicated to their niche sexual fetish? Katie Notopoulos, BuzzFeed’s expert chronicler of the internet’s worst things, looked into “wine dipping” this week, but came away with more questions than answers.

“I can’t tell if it’s real or not,” she concluded.

Notopolous put the question—is this a joke or nah?—to a public vote, but my curiosity remains unsatisfied. The subject is just too juicy (sorry!) to let go of. So here’s my own investigation into the brief history and strange, rich culture of wine dipping.

Initially, I suspected dipping was a joke inspired by a 2013 Australian sexting scandal. Peter Dowling, then a member of the Queensland parliament and chair of its ethics committee, was busted for texting a photo of his Li’l Dowling bobbing in a glass of red wine to a woman who was not his wife.

But I was wrong. The practice (or prank) predates the Dowling fiasco by several years.

Whispers of wine dipping have floated around the internet since at least 2009, when an Urban Dictionary entry appeared (authored by user “WineDipper,” of course.) The act is described not in terms of a sexual fetish, but as a pretentious way to fully enjoy the sensory experience the wine provides: “The art of dipping your genitals into wine, as to savor and enjoy the aroma, taste, and unique qualities of a wine.”

Circa 2010, a question about wine dipping popped up on highly reliable and definitive Q&A site Yahoo! Answers: “I am holding a wine dipping party (where you dip your penis into various fine wines) and I was wondering what a good snack would be. I was thinking a few good cheeses, but I don’t know anything about cheese. Thanks!”

The original poster’s identity is lost to time, but at least one responder seemed to take him seriously: “Do the men get to drink too or just dip?” asked “Freesumpin.”

“Ever play ring around the rosé? As far as cheeses go, perhaps an Italian Smegonzola would do in a pinch!”

The OP responded with some illuminating updates:

Update: Only red wine will be used to dip.
Update 2: To freesumpin:
No, we pour, examine, smell, and dip. Some people like to dip into olive oil first, but, in my humble opinion, that’s like making love to a girl with a condom on.

As we’ll see, some of the recurring tropes of the dipping community seem to have originated here, including the controversial application of olive oil to the member before dipping and jokes about how the only cheese that pairs with a wine dip is smegma.

The heart of the wine dipping internet is, as Notopoulos reported, a forum called the Vineyard, hosted on 7chan, an anonymous imageboard site created by disgruntled 4chan users in 2005.

Initially, this board was a protest against 4chan’s decision to ban “raids” of other websites, but it turned into a strange and thriving site with many more boards than 4chan itself. One of those boards is /v/, or the Vineyard, established in 2011.

“Wine connoisseurs” there affect all the snobbery of traditional wine dudes, but they insist they don’t drink the wine like commoners. They only put their dicks in it. (Women are encouraged to soak up the wine with a cloth and “experience” it vaginally, but female posters are somewhere between rare and nonexistent on the Vineyard.)

Recurring themes include a distaste for champagne, the mere mention of which will result in a ban for “lack of sophistication,” as well as a fondness for wines from New Zealand’s Central Otago region.

“Got my viticulture exam tomorrow and freaking out a little. Please send encouragement and comradere upon the finish, whence i shall dip in a delicious 2007 Central Otago Pinot Noir,” wrote one poster in 2011.

“Don’t fuck the police. Seduce them. Pour them a bottle of 2009 Otago Pinot Noir and make love to them. Gently,” another suggested in 2012.

“So I’m a finally a real Winemaker in Central Otago. When telling the winery staff to do ‘dips’ (where you measure the headspace between the wine and top of the tank) or ‘taste dips’ (where you drop a suspiciously phallic rod through the red fermenting cap to get some juice, usually for testing purposes) I giggle like a bitch. People are getting suspicious. I always giggle,” read one post, nearly a year later.

Could these posters all be the same guy? Sure. Or the wine dipping community could be very particular about its terroir. It’s hard to tell with all that anonymity.

And here we return to the questions of cheese and of olive oil, which are both debated vigorously by the gentlemen of the Vineyard.

“A nice havarti is superior to all other cheeses. The aroma and soft texture contribute to the most exquisite of bodily pleasures,” insisted one.

“At risk of sounding gauche, many men, especially those of us who reside in these United States of America, lack a foreskin. I, myself, have experimented with various soft cheese—mostly derived from fine goat milks—as well as double-cream bries, and yet I feel like I am missing out on a certain I-don’t-know-what,” added another.

“The only cheese a dapper dipper like myself requires is a fine smegma,” a third retorted.

Well, that debate appears to be settled. As for the oil, some favor it and others abhor it.

“One should only penis dip after the aforesaid penis is dipped in olive oil,” remarked one anonymous poster.

“No, that’s strange man.. What’s the matter with you? Olive oil?” another wrote.

“I concur, the feeling is less the satisfactory and you ruin your newest bottle,” a third added.

Seems the oil is a matter of personal preference.

When not discussing the minutiae of the hobby, the ‘gentlemen’ occasionally confronted the central question here: is this all a fucking joke? After all, 7chan also has a board devoted to the known hoax drug jenkem, a substance laymen might refer to as “poop.”

“I won’t knock a fetish, I’ve got too many myself that are not considered the norm, but I do not understand this,” wrote one visitor to the Vineyard.

“Why does it feel good? Is it possible to absorb the alcohol through your penis? (or more likely, your urethra?) I simply want to understand this fetish, preferably without all the big words… Why does /v/ get off on inserting your member into a glass of fine wine?”

Some of the dippers took offense to the suggestion that there was anything sexual about their “refined” activity, and one responded with a blatantly made-up aristocratic origin story for his own dipping habit:

My father taught me how to dip. It was a right of passage of sorts. Marking my first tentative steps into manhood. Having grown up in an upper class household it was expected of a man to dip as one would offer cigars or a handkerchief. In my early twenties I concluded that it was time for me to travel and see how the other half lived. I went to a quaint cottage B&B in Devon. The only shop for 20 miles stocked nought but “Buckfast Tonic Wine”. A sort of peasant drink. One for the have-nots certainly. Regardless it would have to do. I entered the living area of the cottage and poured myself a glass of this syrup. Stoked the fire while the sample took breath and stripped down to my under garments. Gently stroking The Captain in anticipation of the dip. I approached the glass and time itself slowed as I slowly dipped. It was wonderful, superb even.

In other words: Yes, it’s a joke. But it’s a joke that goes really far sometimes. In this thread, a man narrates a satisfying dip, complete with photographic proof:

Is it possible, even likely, that there are men who actually get off on submerging their penises in wine? I concede that it is. But these are not those guys. These are some dedicated jokers who kept a satirical “wine dipping” subculture going for the better part of three years, sometimes exposing their dicks in the process.

I don’t believe they’re serious, but I applaud their commitment to the bit. They’ve truly put the “weenie” in “oenophile.”

The Vineyard only comprises 8 pages of posts—a few thousand in all—and appears to have gone dormant in 2014. The only action it had seen in years—before this week’s BuzzFeed post, anyway—was a reply this April from someone using the name of 4chan’s founder, moot.