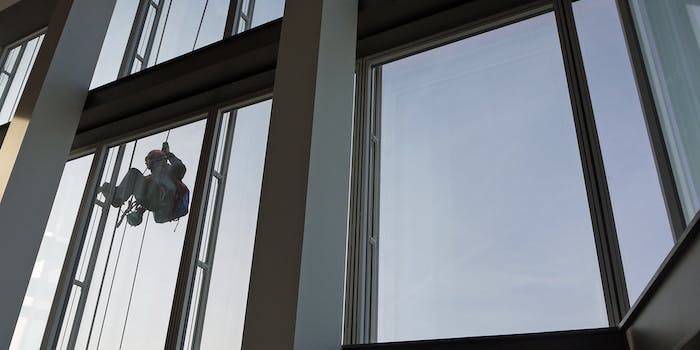 We wouldn't blame these people for quitting their jobs.

If you think waking up every morning and dragging yourself into a cramped cubicle is the definition of a hellish job, consider the plight of the window cleaner. Actually, don’t just consider it. Watch this video of a two intrepid window washers as they swing precariously from the 91st story of a massive skyscraper in Shanghai.

The video was shot from within China’s World Financial Center after a very powerful wind gust caught the window cleaners’ platform. The cradle holding the men swung violently away from the building before crashing back into it several times. Eventually, the repeated battering shattered at least one pane of glass, leading to the evacuation of the 91st floor.

The two window washers were eventually rescued from their dangling prison, but not before enduring minor injuries and, we have to imagine, questioning their choice of career.