What happens after your Live Story snap gets viewed nearly 100,000 times? Nothing.

The app’s soaring popularity among millennials makes it an attractive destination for both 20-something users, and investors alike. According to a report from AdWeek, Snapchat is the fastest growing social network, even outpacing Facebook in its early days. Although there’s relative anonymity afforded by the app’s function, where posts only last for a finite amount of time, user snaps aren’t so anonymous when they’re self-submitted from one’s own personal feed to the Snapchat’s curated “Live Story.”

Many users try their hand at capturing fun, quirky moments, in hopes of making the “big time” into the live feed. But what happens when you actually hit the jackpot? We found out—the hard way.

What became a snap-worthy moment started as a sad realization at the Daily Dot’s New York City office, where Monday one editor’s desktop cactus plant died. It was survived by another, smaller cactus plant in a coffee cup, one that remains in fairly good health. Although we had to put the dearly deceased cactus out to pasture, a mini-funeral procession (coupled with my a capella rendition of Katy Perry’s “Firework”) led the poor thing to its final resting place—a plastic trash bag. (Yes, I sang the words, “Do you ever feel like a plastic bag” over a dead cactus at work. Somehow, I’m still employed.)

But as quickly as we mourned the dead, we also celebrated the living. One of my colleagues, LOL writer Gabe Bergado, had a novel idea: to take the living, baby cactus around for a little office stroll and some TLC. As resourceful as ever, he found a string to tie around the cactus’ mug handle—and soon after, he put it on the floor, picked up the string, and literally walked the cactus around the 18th floor of a Manhattan skyscraper. 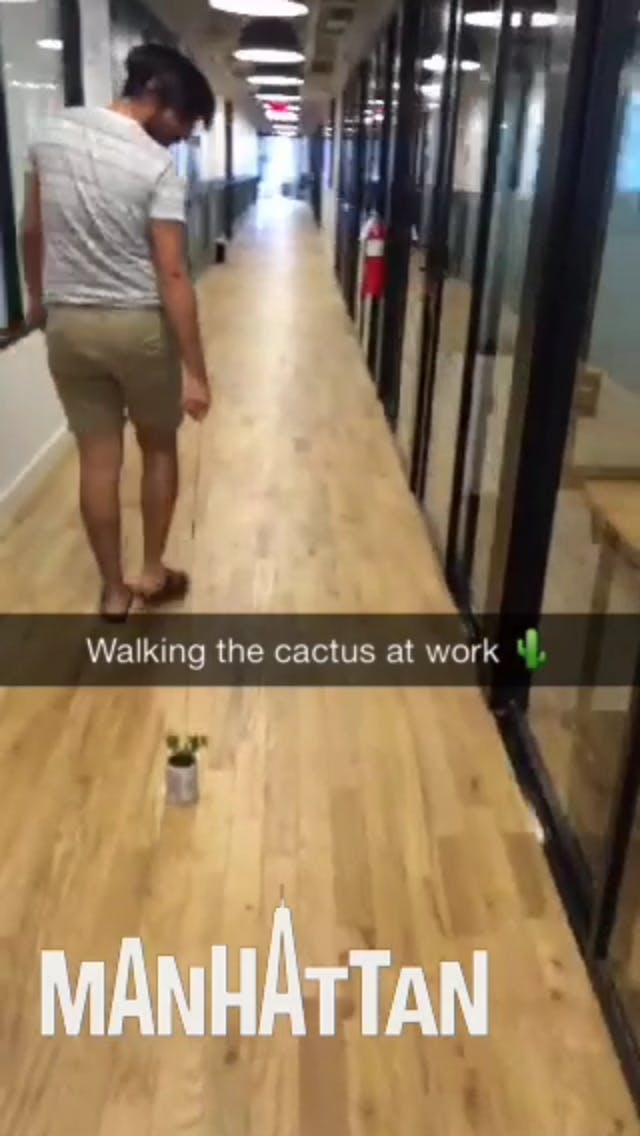 It was too good not to snap, and brought joy to everyone in the Daily Dot’s office, while befuddling our neighbors. In an instant, I made a 10-second Snapchat video from my personal account. “This is too good not to send to the NYC Live Story,” I said, hoping that one of my entries would finally make it to the big time, after numerous failed attempts.

Moments later, he got a message from a Facebook friend. “Wow did you make it into the NYC snap story? I h8 u,” she said. And as I plugged away at my keyboard, Gabe snapped me out of my working trance, telling me to check the clip in the “Our NYC Story” section of my personal feed. Lo and behold, it was picked up by Snapchat’s team of curators—and had been viewed more than 5,000 times in a matter of minutes. (Along with a number of screenshots, because the Internet can’t get enough of Gabe.)

The next day, about 30 minutes before the snap would exit the NYC story for good, it had been seen more than 83,500 times. But unless you know me or Gabe, you had no clue who appeared in the Snap, let alone the person/account who snapped it.

So much for getting Snapchat famous, right? 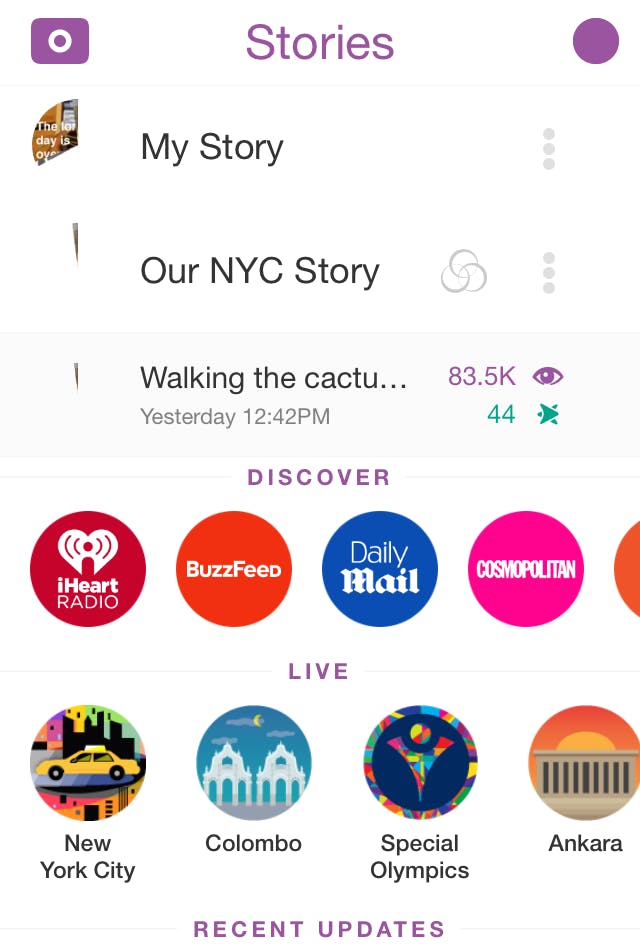 Indeed, a few other people I know have testified to this same feeling, despite their excitement about being part of a Snapchat Live Story. Had this been a video on Facebook viewed or shared several thousand times, my Fan Page would’ve likely seen a sizeable bump in page likes. Had it been retweeted more than 80,000 times, most people would have been deluged by Twitter followers. And if it were on the way to becoming a YouTube viral sensation, the channel that produced this small video would’ve gained a new base of subscribers. That opportunity lost, by positioning content in the form of a snap, is a bit sobering compared to what’s available on other social networks.

On Snapchat, where Live Story is the only vehicle for a user’s Snap to reach an audience outside of their own friend circle, users get no credit for creating content that gets curated for the broader community’s viewing pleasure. Mind you, it’s an app that’s grown so quickly, with the highest concentration of millennial users across all major social networks (45 percent), that a recent round of funding—to the tune of $650 million—saw Snapchat valued at more than $16 billion. Snapchat’s clearly making bank, but what do users get in return for their participation in the community?

A Snapchat representative told the Daily Dot that the platform currently doesn’t, nor does it have any current plans to credit users whose snaps appear in a Live Story. “It’s just how the product is,” the rep said. “That’s not what Live Stories are about.”

The idea, however, is that the Snaps are sourced from a broader, if not scattered, community of users. Live Snaps function as a touchpoint on the platform for people to feel connected, regardless of which city they’re in or what major event they’re attending. When Live Snaps were expanded last August, a company blog post boasted that the function is “a great way to check out what’s happening around the world … The world has never experienced this before—it’s truly a product of the Snapchat community.”

In fairness, the app is still in infancy, and—like Facebook—it’ll take time before more robust features, and community-building capabilities are built in to the app. But aside from free day-to-day use, which includes recent ad plays within the “Live” and “Discover” feeds, and a shot at being curated into a Live Story, users providing free content seem to lose out on vital elements of being part of a social network. That includes an option where users who make the Live Story can be publicly identified, and connect with others who interact on Snapchat. As the saying goes, “If you never say your name out loud to anyone, they will never call you by it.”

It’s a different case altogether if a social network’s platform isn’t yet built with an ability for users to know and be known outside of their own, smaller networks of friends.

Of course, the ability to share photo and video Snaps with friends and others, with relative anonymity and impermanence, functions as a major draw for people who tire of online destinations such as Facebook, where identity and information is tied to everything. Snapchat, then, is refreshing, as one can still enjoy sharing with friends as much as they like, without nearly as much risk or liability.

Snapchat’s clearly making bank, but what do users get in return for their participation in the community?

However, when users self-submit a personal Snap to the Snapchat Live Story, they’re giving the company’s curators permission to share it with the broader network of users. With just a few taps, the user gives up the relative obscurity and privacy of their Snap, making it publicly viewable for 24 hours. Sure, there’s some sadist allure in knowing that people can see what you’ve snapped and never know who did it.

But for those who seek connection with other users on the app, the Live Story feature provides a major opportunity to reach people in a way that other features (such as “Add Nearby”) don’t allow. Without the option to be known to others on the Live Feed, users lose out on the ability to cultivate community or a following, as a way of both acknowledging and incentivizing their contributions to a community-sourced feed.

It’s like getting your 15 seconds of fame, without anyone ever knowing your name, and not reaping any benefit other than knowing it spread like wildfire. The next, new viral sensation could be lurking somewhere in the Live Story feature, and none of us will be the wiser. And that kind of stinks.