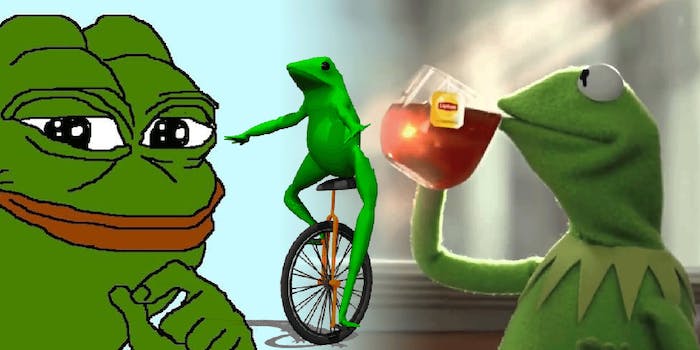 The evolution and secret destiny of frog memes

This is the dawning of the age of amphibians.

OK, hear me out, but I think there’s a Frog Messiah coming. I’ve been researching the signs and prophecies; I’m on some Da Vinci Code shit here. I’ve never seen/read The Da Vinci Code, but it’s about a messiah, yeah?

Obviously, I first saw the signs during the height of Dat Boi. “There are a lot of memes about frogs, huh?” I asked my editor. “That’s a thing, right?” He said I was the fourth writer to point that out to him.

And he told me to figure out why.

WATCH: A statement from @KermitTheFrog on #tealizard and the "But That's None of My Business" meme. https://t.co/FxAsTTpyjj

But I stopped to ask myself: Why are we all noticing this? Sure, there are a lot of frog-based memes, but it’s nothing next to cats. There’s Grumpy Cat, Longcat, Nyancat, LOLcats, Business Cat, Ceiling Cat, Hipster Kitty, Maru, Pusheen, Garfield Minus Garfield—and I’m just cherry-picking. I’m not just saying “the internet has a lot of cats,” I’m saying cats get a new specific meme character, like, every day.

And so on down the hierarchy. Birds have Bird Rights Activist and Birds With Arms; sharks have Left Shark and Fuck Yeah Sharks. Even unicorns have Charlie the Unicorn and Robot Unicorn Attack, and they’re not even real. But none of these make us stop and think: “Huh, that animal is oddly popular for memes.”

Here’s my first theory: Most of these animal memes say something about the species. Cats are playful/grumpy, dogs are friendly and optimistic. Sharks are celebrated as cool or ironically depicted as dorky. But what about the frog memes?

The big frog memes are Foul Bachelor Frog, Pepe, #tealizard, and Dat Boi. (Hypnotoad doesn’t count—it’s a toad.) What do these memes say about frogs? Nothing coherent. FBF is gross, which might be somewhat froggy. Dat Boi is chill and athletic, which you could argue are froglike qualities. But there’s no commentary on the typical frog in the smug “but that’s none of my business” of #LiptonAmphibian.

Pepe the Frog doesn’t even have a particular vibe—he’s an everyman whose expressions range from detached to regretful to furious. Dude gets drawn so many ways he’s like a one-man rage comic: 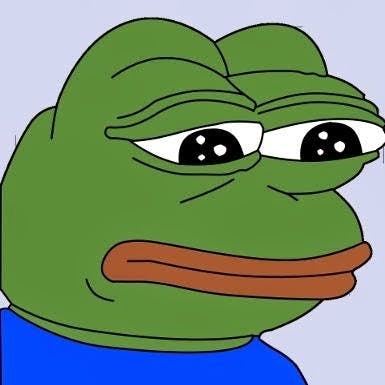 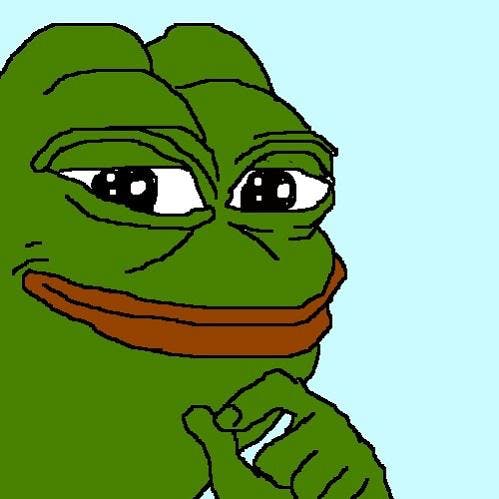 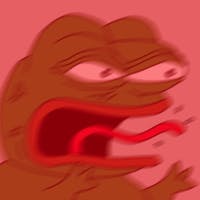 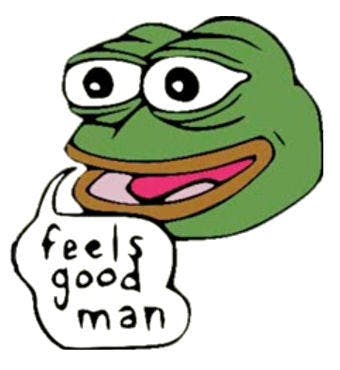 Putting these back in chronological order, there’s lowly Bachelor Frog, trod-upon everyman Pepe, judgmental #HotDrinkMuppet, and the universally beloved Dat Boi, celebrated everywhere he rolls. Each major frog meme, over time, has been higher status than the last. 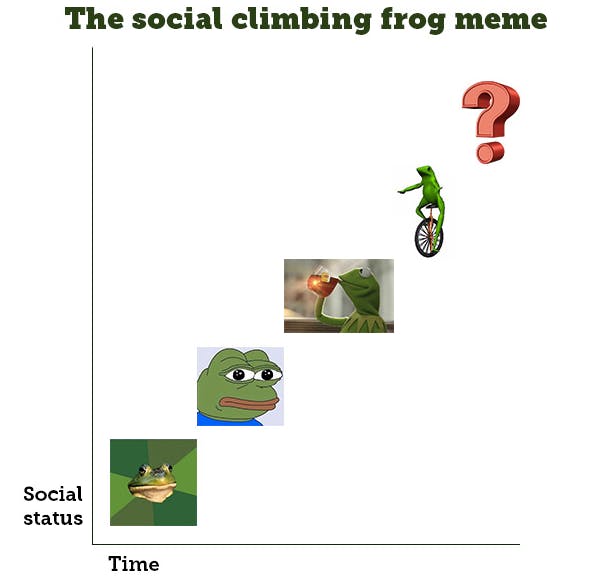 I feel I’ve lost some of you here. Who cares about fictional social status? Ah, but each of these memes is also more popular than his predecessor.

Bachelor Frog was just part of the Advice Animals crew, always living in Courage Wolf’s shadow. Then Pepe got his own following, so popular on 4chan and Reddit and Tumblr that rare Pepes are now worth millions. But he was still a meme for the Weird People, not the normies—as evidenced by the freakout over Nicki Minaj and other celebrities posting Pepe.

Then there’s #CoffeeKermie, who broke into the mainstream of Twitter and Facebook. Now, some might argue, that #BrewChugginFrog is surely more popular than Dat Boi, but is a meme truly famous if Good Morning America doesn’t know what it’s called? No. So Dat Boi is more popular, because everyone agrees on his name.

The eagle-eyed among you may have noticed a question mark up in the corner of that graph. That’s not a meme! (It would be a very cool meme, but in this case it is not.) That’s a visual representation of my next point:

A greater frog is coming. And that frog will be the highest status of all, a Messiah figure we will follow lovingly. NO, NOT HYPNOTOAD. Hypnotoad is a fucking TOAD, and he doesn’t lead with love, he TRICKS US with PSYCHIC FORCE. He is a false prophet.

What can the earlier frog memes tell us about the coming Frog Messiah? In the Christian tradition, each of the four gospels highlights a different aspect of the savior to come, each bearing an animal symbol. Matthew emphasizes his humanity (symbol: winged man), Mark his kingliness (lion), Luke his sacrifice and service (ox), John his divinity (eagle).

Foul Bachelor Frog is a photo of a real frog, like most advice animals (and most animal memes). It is a single visual representation accompanied by many texts. This implies that the Frog Messiah will teach us many lessons, but these lessons will cohere into a single philosophy.

Pepe is a freehand drawing. Unlike a photo, he takes many forms, evolving from a single happy face into millions of rare Pepes. Pepe represents the Frog Messiah’s many changing moods and shapes.

this is a rare pepe and feels post only in 100 000 posts. If u dont upvote this in 10 seconds you will have bad luck and suffer

#DrinkSnake is a photo of a three-dimensional representation of a frog. Once known as “Kermit sipping tea” or “But that’s none of my business,” the meme was rechristened many times over this week. FBF had many captions, Pepe many images, but #GlugGlugGrasshopper has many names, just like the gods of Islam, Hinduism, and Judeo-Christianity. These names represent the Frog Messiah’s omnipresence.

Dat Boi is a computer-generated image, in some incarnations animated. He has one name, and it is spoken every time he appears. In some ways, he is a return to the fixed form of FBF, but he is a digital creation, born wholly of computers. And this prefigures the most amazing characteristic of the coming Frog Messiah:

The Frog Messiah will be purely computer-generated. Not the way Dat Boi was sculpted by humans via computers, but entirely crafted by a computer program. It will be a frog not born of man, but of pure internet.

There’s one piece missing here. The Christian god was chronicled by the Four Evangelists, but he was also announced by a contemporary prophet. What frog meme is left to fill such a role? The “It is Wednesday, my dudes” frog is a notable contender, but he’s really only good at announcing that particular day of the week.

No, the prophet among frog memes is more complex, far less understood, and somewhat terrifying.

So I hear you guys think you’ve seen some crazy stuff on Late Night Imgur. Let me up the ante to Cthulhu levels

Yes, it is the Google Deep Dream frog. Just as John the Baptist had a blood relation to his Messiah and a similarly miraculous birth (conceived by a very old couple), the Google Deep Dream frog was created by a computer, using source material from the real world. Some mistook John for the Messiah himself, and some may mistake GDD Frog for the Frog Messiah. But GDD Frog isn’t even a major meme. Like John, he wanders in the wilderness. But watch him. For he will point us to the One True Frog.

OK, so if that’s all as lucid and straightforward to you as it is to me, let’s get to the real shit, yeah? I’ve been digging around and I found solid evidence that TIME is a CUBE! Stay tuned, and stay woke.

This is a new interpretation of the Frog Messiah Prophecy that apparently disregards Foul Bachelor Frog. Was he a false prophet? How does this connect to the Egyptian plague of frogs? Why can’t I find any Google results for “Frog Bhagavad Gita”? I’ll keep you posted as I continue to uncover proof of the Frog Messiah.