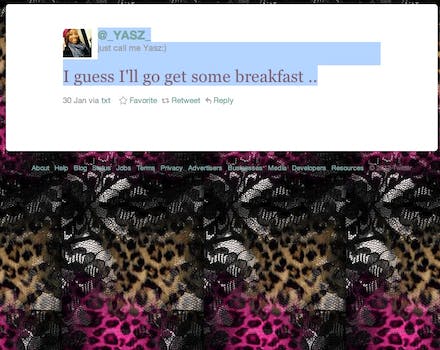 Two-thirds of tweets are worthless

A study finds Twitter users only value one out of three tweets they see.

Twitter users say just over one-third of the tweets they receive have value, according to a study conducted by Carnegie Mellon University, MIT, and Georgia Tech.

By asking nearly 1,500 users to anonymously rate tweets from accounts they followed, the researchers behind “Who Gives a Tweet?” determined that 36 percent of tweets elicited a positive response, 25 percent elicited a negative response, and the remaining 39 percent inspired no opinion at all.

“A well-received tweet is not all that common,” said Michael Bernstein, an MIT doctoral student who helped conduct the study. “A significant amount of content is considered not worth reading, for a variety of reasons.”

According to the analysis, a “bad” tweet could be too long, too short, too negative, out-of-date, or just plain boring. (Researchers said Foursquare check-ins were judged especially harshly).

On the other hand, some of the most “successful” tweets contained questions, valuable information, and (perhaps surprisingly) self-promotion.

But if it’s easy enough to avoid bores on Twitter by unfollowing them, why is this study important?

“Analyzing the negatively rated tweets, and the consensus that forms around them, will help us understand the emerging approved or accepted norms in these new forms of online communication,” Bernstein said on the “Who Gives a Tweet?” website.

So the next time you’re about to tweet “Just found out Kim Jong-il died, and now I’m eating a disgusting turkey club (@ Subway),” maybe you should turn off your phone. And order something else.