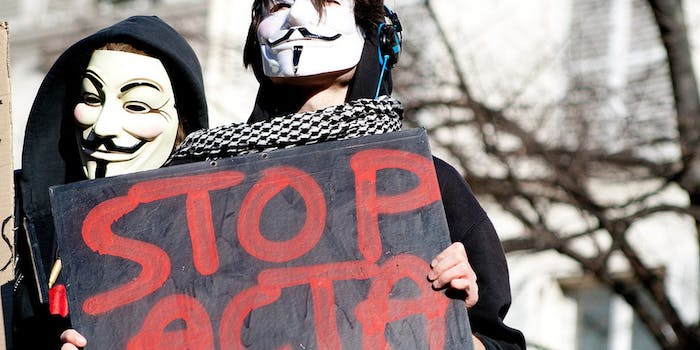 To the nearly 50,000 Americans who officially stand against the Anti-Counterfeit Trade Agreement (ACTA), the White House says it hears you.

But it’s not backing down. Not yet.

ACTA, a vast, multinational trade agreement that nominally would protect intellectual property across the world, has been heavily criticized as legalizing invasive practices by governments, such as scanning citizens’ Internet use for copyright violations.

In response, nearly 50,000 people have signed a White House petition against ACTA. That caught the attention of the White House, and late last week it offered an official response.

In the statement, Miriam Sapiro, the White House’s Deputy Trade Representative, wrote that the agreement was necessary for protecting Americans from unsafe, imported counterfeited goods, which have nothing to do with the Internet. She also claimed concerns about ACTA infringing on privacy rights are unfounded.

ACTA specifically recognizes the importance of free expression, due process, and privacy. It is the first—and only—international intellectual property rights agreement to provide explicitly that enforcement of intellectual property rights in the context of the Internet “shall be implemented in a manner that … preserves fundamental principles such as freedom of expression, fair process, and privacy.”

“I only politely pointed out that the good ambassador overlooked the petition’s concern that there is a constitutional issue and that ACTA requires congressional approval since it relates to [intellectual property],” EquanimousMind wrote.

“I have been consistently disappointed by the responses to ‘We The People’ petitions wrote TheManMulcahey. “This lets citizens influence the government like a megaphone helps someone talk to their dead grandmother.”

The ACTA debate is raging in the European Union, which is expected to either fully ratify or reject the agreement in July. In preparation, some activists there are preparing for what might prove the largest physical protest for Internet rights in history.

This highlights the extent to which ACTA’s critics in the U.S. feel they were blindsided by their country’s acceptance of the agreement.

The Office of the U.S. Trade Representative quietly signed ACTA in October without Congressional approval. As EquanimousMind noted on Reddit, many, including a band of 50 legal scholars, have claimed that act was unconstitutional.

As a result, anti-ACTA activists in America are playing catchup, having only created an official White House petition on January 21—three days after activists went on a successful Internet strike against the similarly unpopular Stop Online Piracy Act.