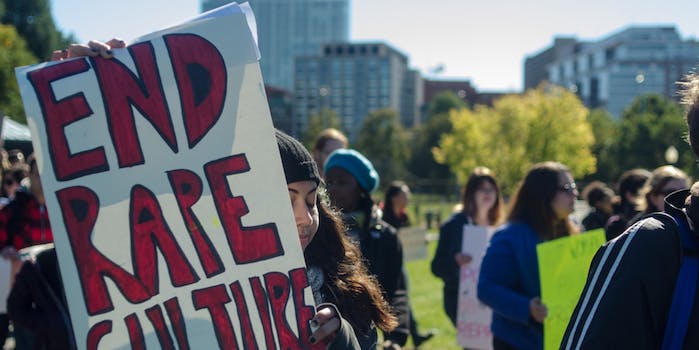 How to define rape culture

How a Facebook conversation can help us all understand rape culture.

Last Friday, Anne Thériault released photographs she received of a Facebook conversation between five members of the board of the Student Federation of the University of Ottawa (SFUO). She wasn’t a party to this discussion, thank God, because if you weren’t already aware, this conversation was a product of their frustration over the victory of the new leader of the Federation, Anne Marie Roy.

The photographs that were released, which are part of an ongoing issue within the SFUO, capture a conversation that describes the assorted sex acts one of the participants seemed to intend to engage in with Ms Roy. The conversation included the exchange, “someone punish her with their shaft,” and the reply, “if you fuck [her] I will definitely buy you a beer.”

Anne’s article has been linked to from a variety of areas (including the SFUO’s own publication, The Fulcrum), and almost invariably, when (presumably) university-age men get involved in the discussion, they defend the participants in the discussion, claiming that this isn’t rape culture; they were just talking about much they wanted to have sex with her.

If that isn’t rape culture, I’m not sure what a better example could be.

But their apologists insist that we don’t live in a rape culture. Because, despite myriad examples in the media, they can’t (or won’t) interpolate a common thread of all the incidents to discover a working definition. So, how about this, which I’ve derived from all the examples I’ve discovered and read of since I started paying attention:

Rape culture is the gradual normalisation, through, for example, jokes, commentary, and apologia, of the exertion of one person’s will over another, through the use of coerced or forced sex acts, such that such exertions become acceptable or justifiable as either hypothetical or practical actions.

Does that about cover it? I think it does. The way we suggest that victims of prison rape somehow had it coming, simply by virtue of being convicted criminals, is there. The way we suggest that, when a woman gets drunk at a party and coerced into sex she wouldn’t normally have, that she’s somehow invited it, is there. We’ve got all the tasteless rape jokes covered, including those made by these five individuals—and as a bonus, the included definition of rape, I think, avoids the obnoxious fallacy of “all intoxicated sex is rape”.

That all but one of them are so aggressively refusing to admit that their conversation was so horrifying is a further attempt to normalize it. They’re acting as though Ms. Roy exposing them was a greater wrong than what could, in a certain light, be seen as a conspiracy to rape her. And why? Because she won the Student Federation’s election.

These aren’t even reasonably responsible adults. They’re undergraduate students, and they seem to think that all of how they’ve been behaving is acceptable. This speaks volumes of the society in which they grew up, that at (roughly) 22 years of age, they can so thoroughly disrespect and disregard women.

The worst part of it is that, for women who put themselves on the front lines, who speak and act as though they deserve to be regarded equally with men, this kind of reception isn’t remotely uncommon.

So try to tell me that rape culture isn’t real. Because every time something like this happens, I know that it is.

Matthew G. P. Coe is a Toronto-based computer programmer, father, husband, and self-professed science-fiction nerd, though not necessarily in that order. He writes occasionally, at Quoth the Runtime, “Segmentation fault”, his blog about programming and issues in the software industry. This article was originally featured on The Good Men Project and was republished with permission.