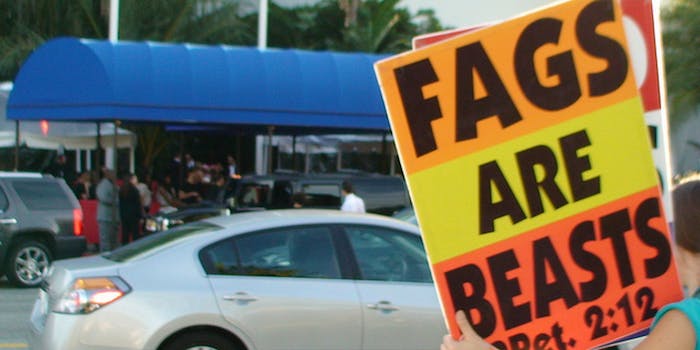 Megan and Grace Phelps-Roper have left their grandfather's congregation. Where to next?

Megan Phelps-Roper and her sister Grace have walked away from the only life they’ve ever known. The siblings have renounced and left the Westboro Baptist Church.

For the unfamiliar, the WBC is a small congregation based out of Topeka, Kan., infamous for picketing fallen veterans’ funerals and other high-profile events with signs that read “God Hates Fags.” The church’s activities are considered to be so heinous that a We The People petition asking the White House to label them as a hate group broke records by getting more than 270,000 signatures.

Megan Phelps-Roper’s departure and renouncement of the church is a big deal. At one point, The Kansas City Star named her as the future of the WBC. She’s credited as bringing the congregation into the social media age, being the first of the Phelps clan to join Twitter.

It was fitting then that Phelps-Roper announced her difficult decision online, penning a post—along with her sister Grace—on Medium.com titled “Head Full of Doubt / Road Full of Promise.” The post was also linked to on her Twitter account, which had been silent since Oct. 30, 2012.

“We know that we’ve done and said things that hurt people. Inflicting pain on others wasn’t the goal, but it was one of the outcomes,” the siblings write. “We wish it weren’t so, and regret that hurt.”

“We know that we dearly love our family. They now consider us betrayers, and we are cut off from their lives, but we know they are well-intentioned. We will never not love them.

“We know that we can’t undo our whole lives. We can’t even say we’d want to if we could; we are who we are because of all the experiences that brought us to this point. What we can do is try to find a better way to live from here on. That’s our focus.”

The breakup with the church didn’t happen recently. In fact, according to Jeff Chu, an editor at Fast Company magazine who has also written about the WBC and broke the news over Medium, the separation occurred in November 2012.

“Her departure has hurt them already—she knew it would—yet there was no way she could stay,” Chu recounts.

Chu also writes that Megan Phelps-Roper began questioning her beliefs after a series of online conversations with Israeli Web developer David Abitbol. In one of the exchanges, Abitbol asked Phelps-Roper about Jesus’s stance on forgiveness.

“And then he connected it to another member of the church who had done something that, according to the Old Testament, was also punishable by death,” she said, as quoted by Chu. “I realized that if the death penalty was instituted for any sin, you completely cut off the opportunity to repent. And that’s what Jesus was talking about.”

The announcement has been met with praise and support on Twitter.

If you’ve ever hated on Westboro for being hatemongers, maybe send @meganphelps a congratulations now for seeing the light,” tweeted @wiredjazz. “Takes guts.”

“Very happy for @meganphelps taking the brave step of leaving her family to learn for herself and do what’s right,” said @dusteallen. “Stay strong, Megan.”

The Daily Dot reached out to Margie Phelps, Megan Phelps-Roper’s aunt and subject of a profile we did in July 2012, for comment. She replied via email:

“This applies to every young person who has the great privilege of growing up on the streets of Mt. Zion (Westboro Baptist Church), and comes to years and chooses to enjoy the pleasures of sin for a very short season rather than obey God.  Given the zeitgeist of proud sin that permeates the land, the miracle is the young people who do the opposite – who serve God, and reject the filthy manner of life of this nation.”