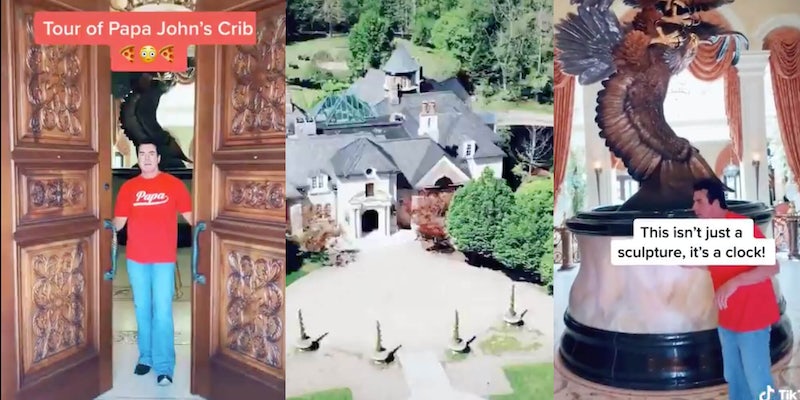 Papa John roasted for TikTok tour of his ‘Papa Castle’

His sculpture of mating eagles doubles as a clock.

In a TikTok, titled “Tour of the Papa Castle part 1,” “Papa” John Schnatter of Papa John’s Pizza gave a tour of his $11 million home.

The extravagance of his estate has people suggesting the video is insensitive due to the current economic downturn, as well as commenting something along the lines of, “money can’t buy class.”

“Howdy,” Schnatter says in the video, wearing a T-shirt with the word “Papa” across the chest in the style of the Coca-Cola logo. “I’m Papa John, and welcome to my crib.”

After a few seconds of drone footage showing the large, castle-inspired limestone home, which sits on 15 acres of land, Schnatter begins his tour by showing off a large eagle-mating clock. Apparently, the clock is also a sculpture and an elaborate pun.

“So about the clock,” Schnatter said. “Eagles go up several thousand feet. They mate all the way down and right before they hit the earth, they separate so they don’t get hurt or killed. Perfect timing. The clock spins four times an hour, check it out.”

As Schnatter moves on to his “library,” opulent molding along the walls and door frame lends to the idea that his home is palace-esque. According to Schnatter, he does everything in his library except reading.

“Off the main foyer is the library,” Schnatter said. “This is where I film footage, this is where I work, write letters. Stay tuned, you gotta keep following.”

Comments on the video from TikTok suggest Schnatter’s clear preference for luxury does not beget any kind of taste.

The timing of the video was also criticized. The idea that Schnatter made a video to display his wealth while millions are losing their jobs as a result of the coronavirus-driven economic downturn has rubbed many the wrong way.

After divorcing his wife in 2019, Schnatter’s reported net worth was $500 million.