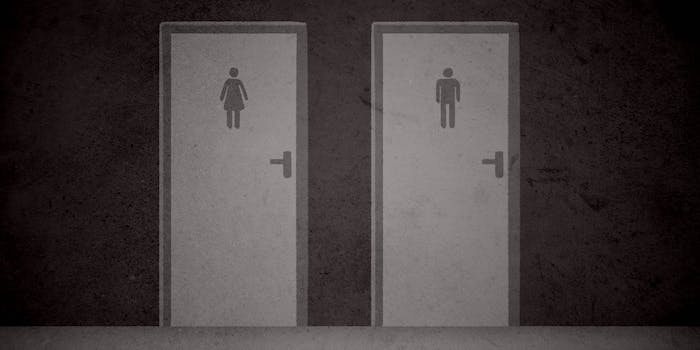 14 of the weirdest bathroom signs from around the world

Might as well pee at a place that thinks you're Superman.

Imgur user Lannister20 has archived some of the world’s most inventive restroom signs, greatly varying in style, direction, and demeanor—though all alike in sheer oddity.

Though some of these may cause people to take offense, regard gender norms as an absolute travesty, or, after one too many beers, fully ignore management’s wishes regarding where one urinates, we still appreciate the collective wittiness. We’ve annotated these ambiguous toilet hieroglyphics to the best of our restroom-reading abilities:

This bathroom gets us asking, first and foremost: How do mermaids pee, anyway?

BLA vs. BLABLABLA—we recognize the joke, but this can come off a bit derogatory.

Beyoncé‘s “to the left” has new meaning with this sign.

These minimal doors will test your Bio 101 knowledge of chromosomes.

This bathroom goes medieval af and gets some laughs with its honest truth.

May the force be with you as nature calls your name.

In Seoul, Korea, some graphic designer decided to get a little freaky.

The beer resembles urine too much for our liking—even if that’s the idea.

This single-occupancy restroom is for all sci-fi and comic book heroes alike! Woohoo!

This bathroom supports a “Come one, come all!” way of life—and we dig it.

These clouds somehow gracefully represent both female and male genitalia.

Peeing has never made us feel so weirdly thirsty.

These are probably all nightmares to come across on a night out, and it only takes a few drinks until we confuse one bathroom for another, but when nature calls… does it really matter?!