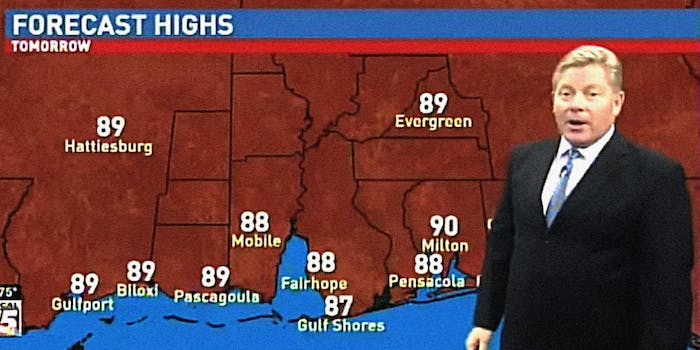 Screengrab via The Woody Show/YouTube

Winds coming in from the south

Sometimes you just can’t hold it in. In those moments, it’s best to just fart as unobtrusively as possible and move on with whatever you were doing before. That’s what this Alabama weatherman tried, but as you can see/hear/clearly tell, he didn’t exactly pull off the “unobtrusively” part.

The weatherman in question is chief meteorologist Chris Dunn of NBC affiliate Local 15 out of Mobile, Alabama. According to the station’s website, Dunn is an “Emmy Award winning broadcaster with 25 years of on-air experience.” So maybe he’s just gotten a little too comfortable on-air.

Clearly someone has added a few effects to this video, so you might be wondering if maybe they also added in that squeaky fart. Perhaps it was a rival weatherman, who was nominated for an Emmy but lost to Dunn? It is, even for a fart, a pretty hilarious sound. Can it truly be believed?

Well, unfortunately for the meteorologist, someone else with a DVR was able to record the segment and unless Dunn stepped on a duck when he backed up, it seems pretty clear he let one rip in the studio.

With 25 years of experience and an Emmy under his belt, it seems like one tiny (in fact kind of adorable) fart isn’t going to affect this weatherman’s job, even if he did contribute to the methane problem that is causing climate change.