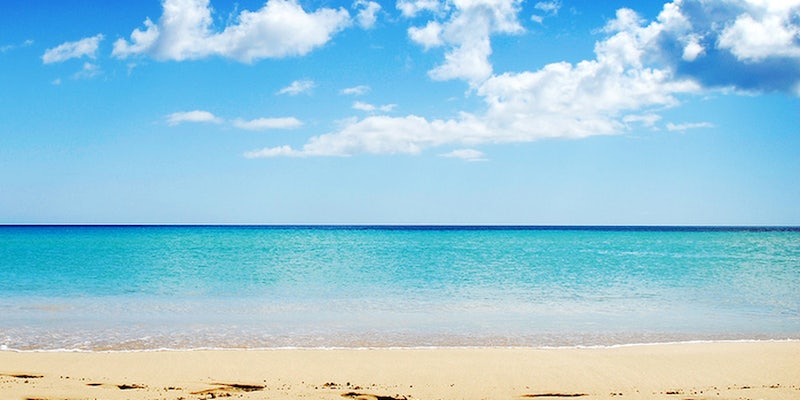 I tried to out-chill @chillsitch, the chillest dude on the Internet

We strapped brain-mapping sensors to our heads to see who could chill the hardest. Here’s who won.

Is the illustrious @chillsitch, Twitter’s most laid-back dude, really as relaxed as he seems?

friday is my monday because takin’ it easy is my job ;)

We found out with the most complex analysis we could think of: strapping brain-mapping sensors to our heads to see who could chill the hardest.

The experiment was highly scientific. We’d undergo three sessions of intense 180-second relaxation periods. We’d up the ante each time, adding visual stressors and loud music of varying obnoxiousness. And we’d use Muse, an electroencephalography-based smart headband designed to improve your “mental and emotional fitness” through “focused-attention exercise,” to gauge our relative repose.

We asked Muse to send a team to officiate our chill-off, but first came the trial run. When I tested Muse, I was the chillest of all my coworkers: The team compared my brain activity to that of a dead person, which I took for the compliment it was. I collected 25 “birds,” the audible chirps that signal one’s deepest meditative state—more than everyone else put together.

Thus was I selected to represent the Daily Dot. We contacted @chillsitch, a.k.a. Taylor Moore, and arranged an after-work face-off with beers and a BBQ delivery dinner. We may have been contradicting the very essence of chillness by turning it into a competition, but that didn’t mean we couldn’t observe the chill ritual of happy hour.

After calibration and some technical troubleshooting—both Moore and I have what my aunts would call “big Irish noggins,” poorly adapted to snug headgear—we were ready to get started. 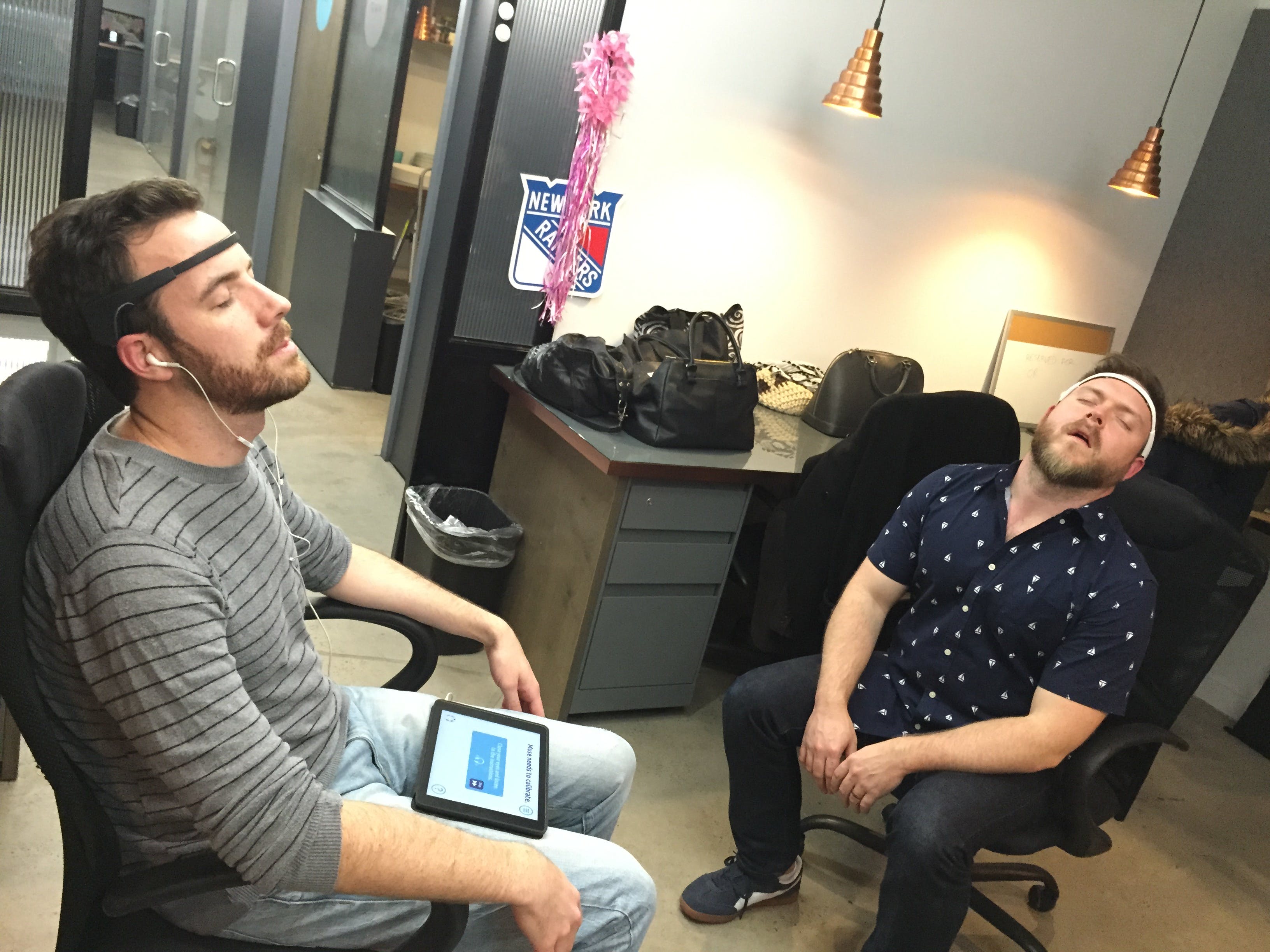 For the opening gambit, we each did a regular three-minute Muse session, following the automated instructions to straighten our backs, close our eyes, drop our shoulders, and count our breaths. I’ve got to tell you, at the end of a long day, it’s nice to kick back with a buddy and have your neural impulses monitored by a device that has a death grip on your cranium.

In the end, I eked out a small victory: I’d been “calm” for slightly longer than @chillsitch, though with more “active” spikes, probably due to excitement over meeting my easygoing idol. I heard one “bird” during my immersion, and @chillsitch heard zero. Of course, neither result was impressive weighed against the 25 birds I’d gotten in my trial run. The stress was palpable. 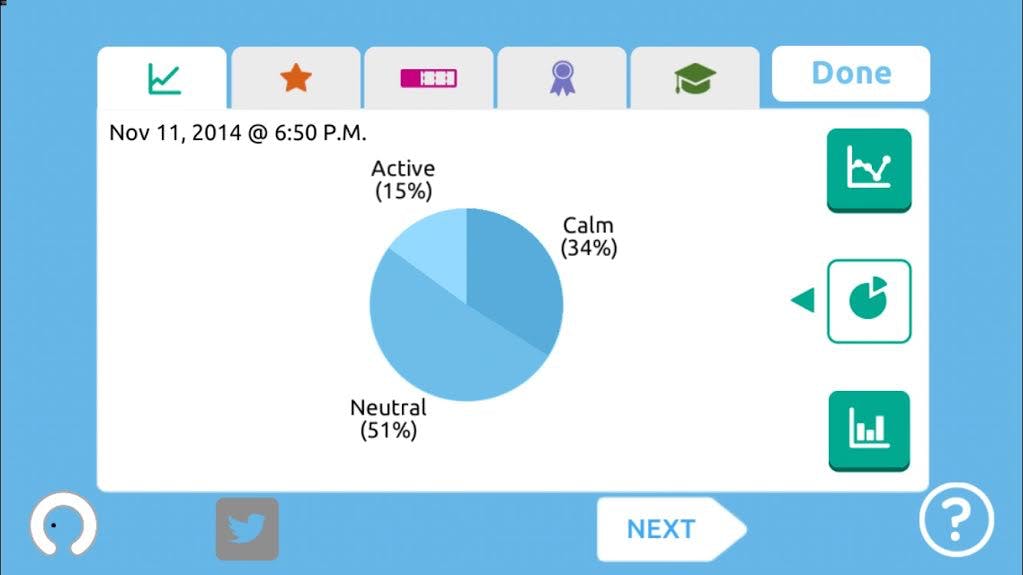 It was time to raise the stakes, so we brainstormed possible distractions and hit upon a most un-chill idea: why not blast some of Skrillex’s most aggressive dubstep breakdowns while we tried to drift off into cognitive tranquility? I’m not exaggerating in the slightest when I say we had to leave our bodies to accomplish this. It was punishing. It was depraved. It was wrong.

Astoundingly, I clocked four birds this time, an overall high for the contest, defying everything we know about sonic vibrations and good taste. Undeniably rattled by the burly bass and devastating drops, @chillsitch again came up birdless, but had a respectable showing anyway: 31 percent calmness against my 40. Truthfully, both of us could have used a performance-enhancing frozen margarita. Or foot massage. And puka-shell necklaces. A big part of the Muse experience is shutting yourself off to any visual stimuli. Well, screw that. For the final test, we decided to stare soulfully into each other’s slackened mugs. Would our chill auras entwine and thereby enhance one another? Or would we falter and each set the other’s mind racing with thoughts of what lay behind those steady eyes? I was cruising to a big final win, I imagined, and made sure we threw some Jock Jams into the mix for good measure.

“I feel like I’ve been on four dates with you,” @chillsitch quipped afterward. The data, however, suggested considerably less romantic anxiety on his end than mine. He’d broken my momentum and remained relaxed for nearly half the session, whereas I struggled to simmer down and turned in my worst numbers so far: calm just 26 percent of the time. No birds for either of us. Over the three rounds, I had been truly chill for 180 seconds. And though in the lead for the majority of the challenge, I was ultimately overtaken by @chillsitch, that slow and steady and supercool tortoise, who chilled for 198 seconds. Hey, no shame in being beaten by the best, right?

Bonus round: Testing the tweets

While we agreed that a tie would have been the chillest outcome, @chillsitch and I ended our hang on pretty chill terms—but not before one final experiment. If his tweets really are the chillest, we reasoned, shouldn’t we be able to prove it? Once again I donned the Muse and conducted a final session while he read to me from his drafts, at the rate of one tweet every thirty seconds. We also had Enigma’s “Return to Innocence” playing, because why not. It was hard not to crack up about things like clown college sororities, but mostly I felt I was melting—in a good way. Honestly, I think @chillsitch missed his calling in spa therapy.

Ready for the awesome part? This actually worked. My graph showed that at regular intervals, I was dipping down into the nirvana of total chillness—except for when I heard a tweet about a ferret named “North Face.” I’ve never found rodents chill, I must confess. Even with this proof of @chillsitch’s strange powers in hand, we realized we didn’t need any fancy wearable to tell us who or what is chill. It’s an unquantifiable essence, a feeling of serenity that can’t be reduced to mere brainwaves. And he who chills with his bro chills best.